My midweek National Theatre At Home visit this week might have been the last for a while. But as lockdown has been extended with a prolongation of social distancing measures in theatres (unless you’re a new Andrew Lloyd Webber musical) it looks like it might be handy for at least another month yet. The NT have been spoiling us somewhat with a raft of great productions but one aspect that they might usefully look into going forward is getting a few more family shows onto the platform. Other than their panto Dick Whittington over Christmas and a limited showing of War Horse, choice in this area has been severely lacking. There is one show, however, that has been on the site more or less since it opened so I thought it was high time I checked it out. 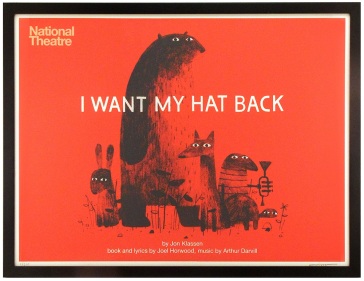 I Want My Hat Back is an adaptation of the famous picture story book by Jon Klassen and is all about, well… a rather morose bear who loses his headgear and sets out to reclaim it. He tries asking some of the other creatures of the forest in which he lives – some frogs, a tortoise, a snake, etc. He hunts high and low and far and wide. Little does he know it’s been appropriated by a light fingered rabbit who believes in the principle of “Finders Keepers”. And that’s pretty much it – unless you begin to see in it deeper parallels and meanings and regard it as a modern day fable which throws some light on the activities of humans. This is also very easily done as the animals have obviously human traits with many of the characters (especially the leading pair) being obsessives of one sort or another. The book has been adapted by Joel Horwood who has half an eye trained on the adult members of the audience but the other one and a half firmly fixed on the children. His often witty lyrics are set to the music of Arthur Darvill who plunders all sorts of musical formats for inspiration including a hilariously heavy rock outing for Rabbit.

Given that Marek Larwood, who plays Bear is wearing a Led Zeppelin T shirt under his fur coat there seems to be a theme building but alas this doesn’t actually go anywhere. Larwood’s shambling deadpan performance is a thing of joy and a couple of his ad libs are priceless. Meanwhile Steven Webb as an evasive hyperactive tap dancing rabbit provides a nice contrast. Three other actors and three actor/musicians take on all the other characters and even the scenery as they become bits of the forest through which Bear stumbles on his quest. The level of invention is high and will have no difficulty in appealing to younger viewers who can use their imaginations to fill in the context. The children in the live audience are obviously having a great time forcibly pointing out to Bear where he is going wrong much to his chagrin. 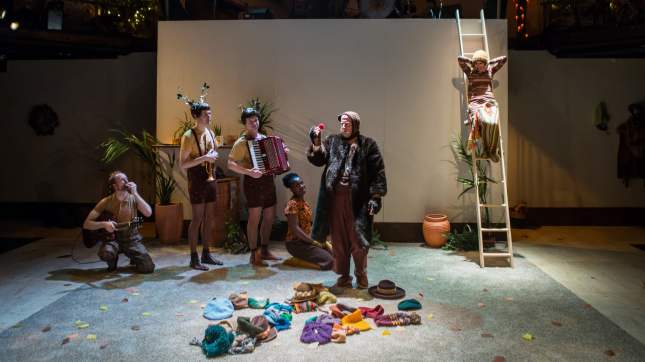 Costume is used intelligently to suggest the various animals; the tortoise, for instance, carries a large rucksack in lieu of a shell and the school shorts of Rabbit suggest his rather childlike approach to questions of morality. Both these and the minimal set are designed by Fly Davis with various locations in the forest being conjured up by Beky Stoddart’s lighting. The three musicians, playing a whole variety of instruments, contribute significantly to the mood of the play. Director Wils Wilson ensures that the rather repetitive situations and dialogue (necessarily part of a good picture book) have enough variation in them to retain interest; this is crucial as what can take five minutes to read becomes a fifty five minute show.

Does Bear find his hat? Will Rabbit repent? What will happen when they face each other (which they do in a delightful parody of the showdown on Main Street in many a Western movie)? No spoilers here, though the ending is rather darker than might be expected from this sort of material; if you’re watching with youngsters then be prepared for some potentially awkward questions. Great fun!