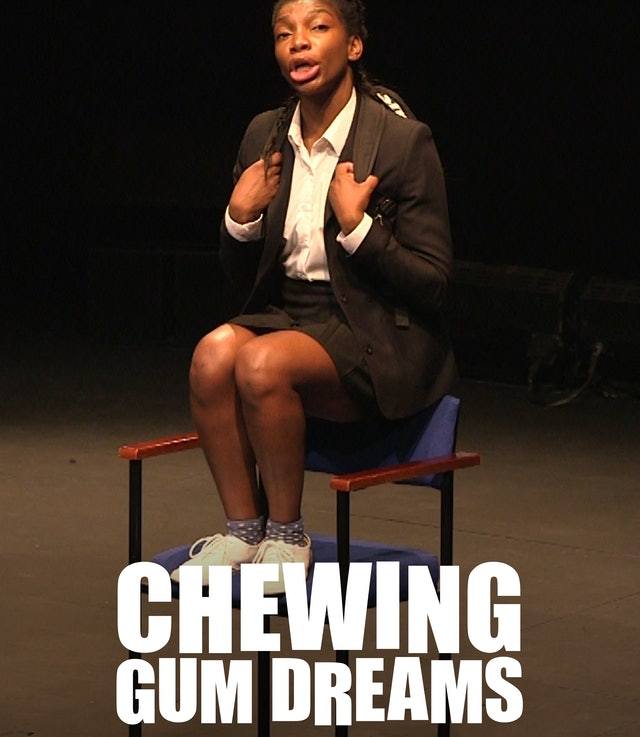 One of the most critically praised shows on TV last year was I May Destroy You conceived, written, produced and directed by as well as starring Michaela Coel. It won a raft of BAFTAs and looks set to repeat the same at the Emmys and just about everyone I know whose opinion I respect tells me it is one of the best dramas ever shown. Well, I’m afraid it didn’t do anything for me, and I bailed after two and a half episodes. Maybe I should have stuck with it a bit longer and I certainly wouldn’t judge it as a poor piece of writing or performance in fact even from the limited amount I saw it was evident that here was an unflinching portrayal of a difficult but important subject. It just didn’t feel like something to which I wished to devote another ten plus hours – maybe I should give it another go.

Anyway, all that is a preamble to introduce one of the latest additions to be found on the National Theatre At Home platform – Chewing Gum Dreams. This is an earlier piece by Coel which started at small venues and gradually moved onto bigger things until appearing at the National’s temporary Shed Theatre in 2014. It’s a solo show about the life of 14 year old Tracey Gordon an inner London teenager as she negotiates with life or rather, not so much negotiates as draws up battle lines with it; somehow you just know she’s going to be the eventual victor even if now it isn’t easy. We first see her on the bus – naturally she’s being loud at the back- with her cousin and other friends. Coel neatly captures the banter which with adolescents alternates between protecting and abusing others as she makes personal remarks and then condemns others when they do the same. We then see her at school where her inability to concentrate gets her into conflict with her long suffering Maths teacher; eventually she verbally attacks her head on. We learn about her deep interest in the opposite sex though that hasn’t gone far by this stage although we do see her trying to buy the morning after pill following a fumbling sexual encounter which makes it highly unlikely that there will be consequences. Most disturbing though are her encounters with sexual bully and abuser Aaron – this area was later revisited in I May Destroy You. Other themes tackled along the way include interracial relationships, underachievement and mental health – there’s a lot packed into just 45 minutes and Coel makes every one of them count.

Tracey Gordon is an interesting creation who at the same time is both a type (see also Catherine Tate’s Lauren) but a clearly delineated character in her own right. What separates her from the many other Tracey around her is a level of self-knowledge – “I ain’t smart enough to be somebody, but I’m smart enough to know I’m nobody” – and just enough spark to realise her goals (with or without Maths GCSE). However, she is going to have to be careful as the title tells us that her dreams are largely constructed out of the air used to blow a chewing gum bubble – and we know how easily they can be popped and destroyed.

The piece started out as a student project and director Nadia Fall keeps this feel by reducing everything down to basics. The various short scenes are played out on a bare stage with just a single chair providing the “locations” while a lot of the heavy lifting is carried out via lighting (Jamie Spirito) and sound (Mike Walker). This minimal approach really works lending greater power to the words themselves which definitely have a poetic quality to them; that said transitions between the prosaic and the poetic can be a little clunky. In essence though, this is Coel’s calling card and it’s interesting to view this through the prism of her later success. This play and the central character were eventually used to develop the TV comedy Chewing Gum … but I’d better stop there as I haven’t seen that either.