Though it has been somewhat curtailed by recent events there always seems to be a constant search for the new Great British musical which will take on the big boys and which hopes to win over new less traditional audiences. With costs in mind these are often small scale, eschewing grand sets and costumes and reducing companies to a smallish number with limited supportive instrumentation. These so called “chamber” musicals are popular with smaller fringe theatres or work well as touring productions and have thrown up some interesting ideas such as John Doyle’s repeated trope of having the actors also be the musicians, e.g. for his reinventions of Sweeney Todd and Company or basing the piece around a tight format, e.g. Public Domain, The Last Five Years and Before After all of which have played at Southwark Playhouse over the last 18 months.

The problem comes when the concept over dominates and this, I feel, is the main issue with Lift which while it doesn’t qualify as new anymore (the ideas for it were first formulated back in 1999) certainly fits into the category described above. This particular version is just one of many that have been staged and was filmed at the Soho Theatre back in 2013 less than 10 minutes’ walk from the show’s central location Covent Garden Tube Station. Here you can take nearly 200 steps from the platform to reach the surface or ride in one of four lifts. It is this approximately minute long journey which forms the central focus of the musical as eight passengers share the space with each other and their lives with us. Central to the conceit is a singer/guitarist busker (George Maguire) who has just been dumped by his partner but has his eye on someone else – one of his fellow lift mates. As time essentially freezes we get to see snippets of the lives of the octet though I couldn’t decide whether this was who they actually are and what they actually do as opposed to the imaginings of the busker. Either way all the men seem to be called Gabriel (cue remarks about angels) while any women are dubbed Sara. This is  totally confusing and had me wondering whether the other passengers even existed or were just supposed to be part of the busker’s imagination. 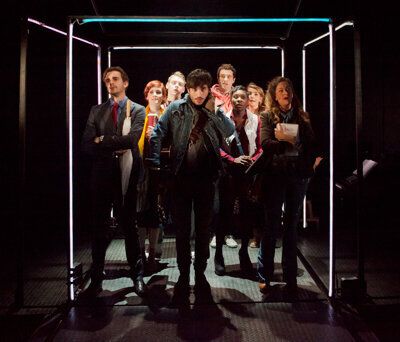 Whatever the case, the disparate group seem to have more in common than would first appear. Two are best buddies – a couple of dancers, one of whom has had to turn to lap dancing to make ends meet and the other a gay ballet dancer out, loud and proud when in London but firmly back in the closet and even with a fiancée when back in his native northeast home. Another pair are a businessman and his secretary; she is the object of the busker’s changed affections while she wouldn’t mind hooking up with her boss. He meanwhile is online pretty constantly forming a relationship with someone he thinks is a girl but is, in fact the ballet dancer. Throw in a couple of transatlantic tourists who double as online avatars and a French teacher who comes into contact with the lap dancer, and you have a recipe for confusion. 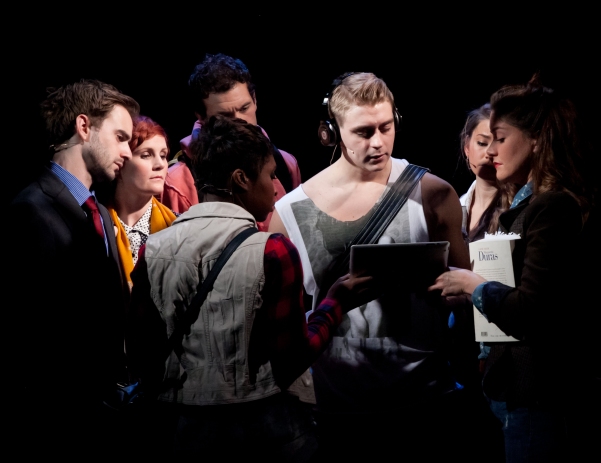 The problem is that this is not in a good way. The various permutations in Ian Watson’s script just become unfathomable and before too long the concept is running out of steam and had started to try my patience. It all becomes a thread which is simply there to join the cycle of songs together. Nor does it help that the songs are all so similar to each other and are derivative of the sort of musical based entirely on shattered dreams, angst and emotional outpourings; Rent has a lot to answer for! Far too many of them halt the progress of the narrative rather than enhance it. The one standout number for me was “It’s Been A Year” performed by Cynthia Erivo in her underwear and which proved to be a real spine tingler. However, one song does not a musical make and Craig Adams as composer and lyricist has to take the lion’s share of the criticism for what swiftly becomes rather tedious.

The cast, however, struggling against the material are generally very good. Apart from the aforementioned Ervio and Maguire there is excellent work from Julie Atherton as the teacher slightly bemused at finding herself in a Soho lap dancing club and strong work from Nikki Davis-Jones and Luke Kempner as the business colleagues. I thought the character of the ballet dancer (Jonny Fines) was bordering on (and sometimes tipping into) clichéland while the roles for Ellie Kirk  and Robbie Towns were seriously underwritten. Designer Georgia Lowe’s stripped back design and Andy Voller’s use of evocative lighting were elements to be admired. 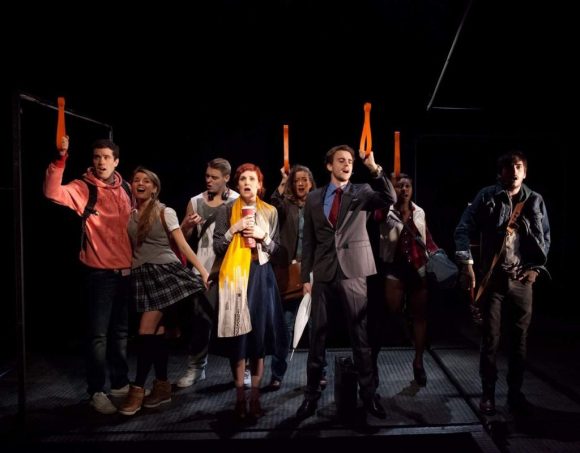 As this is an archive recording my comments are really not going to matter that much  – unless someone was thinking of mounting a revival which is unlikely as social distancing certainly can’t form part of the main premise. While I would have hoped to be more positive in my appraisal I’m afraid it really didn’t do too much for me; in fact, there’s probably a witty line in there somewhere about Lift not pressing my buttons or it failing to “lift” my spirits but it’s raining outside (again) and I really can’t be bothered!