Taking an established storyline and putting a new twist on it is just one way of producing something that is fresh but that will still resonate with an audience who feel some comfort with the familiar but who also want to see something take off in an unexpected direction. It’s a typical enough Edinburgh Fringe approach and having encountered Wonderland for the third time during lockdown (Saving Wonderland) the day before I hit upon two other pieces which were both familiar and yet not.

The first four words of the title of The Little Glass Slipper As Performed By The Queen of France And Her Friends instantly suggest that the source is Cinderella. And, indeed it is, as we are treated to an adaptation of the version popularised by Charles Perrault, Cendrillon; it was he who added the pumpkin coach, Fairy Godmother and the glass slippers into the mix. But this is a play within a play and the conceit is that Marie Antoinette, bored with pretending to be a shepherdess at Versailles has mounted her own production inveigling her courtiers to take part as she appears, naturally, in the central role. However, she has chosen an inauspicious day for the premiere – July 14th 1789. A mob has stormed the Bastille in nearby Paris and things have turned ugly; to make matters worse the architects of the Revolution, Danton, Robespierre and Marat are in the invited audience. The Queen’s fairweather friends mostly flee but the show must go on and when a reluctant revolutionary assassin is dragooned into playing the Prince, a Noises Off style farce ensues. 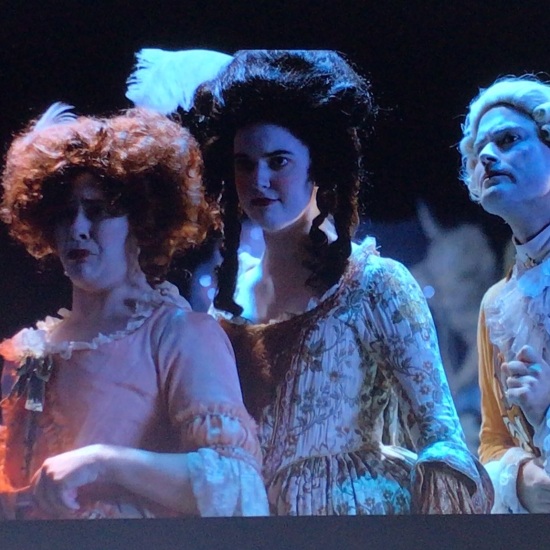 The play is sumptuously produced, costumed and lit, a real feast for the eyes,  and a talented team of actors attack the material with vigour. The script made some telling points about status, power and privilege and the business of putting on a show, but I felt lost its way a little in the closing section where some editing would have been beneficial. The comedy surrounding the tensions of mounting a show (forgotten lines, missing props, actors doubling and trebling to cover absence) are not particularly new but are carried out with a sense of style that matches the era portrayed. A pet project of Cara Johnston playing the Queen (she is also the writer and director), it’s an interestingly diverting hour which doesn’t take itself too seriously and as long as you’re not looking for a detailed history lesson or a traditional take on a fairy tale then there is plenty to enjoy. Anyhow, in terms of mounting a production of Cinderella during a national crisis it puts Andrew Lloyd Webber’s problems into some sort of perspective.

And so, to a rather more adult folk tale, for surely that is what Franz Kafka’s Metamorphosis is. Hijinx has taken the source material about Gregor Samsa’s mutation into a gigantic insect and transformed it into a rollicking fifty minutes which I completely loved and which is highly recommended. Indeed, of the 17 Edinburgh online fringe shows I have now seen this year, this leapt straight to number one on my personal chart. The piece is no straightforward adaptation and plays like an online version of some of Spymonkey’s work mixed up with Inside Number 9 (and there is, I assure you, no higher praise than that). Although some of the original narrative still exists, this is also partly another play about putting on a play and so we see some hilarious online auditions and actors trying to get to grips with devising a storyline having been virtually abandoned by the director. There are even sections which apparently have nothing to do with the main show – an interactive session with a relaxation guru sitting in his bathroom is particularly memorable. While this may seem a bit scattergun it all keeps the spirit of the original alive and is just tremendous fun into the bargain.

There’s a great cast of about a dozen actors who have devised the piece among them providing a set of thematically connected though narratively disconnected scenes. Though mostly darkly comic in tone there are one or two parts that are far more disturbing. The same  group multi-role with more than one of them playing the same character in successive scenes. The fact that they do so in differing clothing and with changing accents reinforces the theme of transformation in the original and only adds to the enjoyment. Periodically there are interactive elements when audience members can volunteer to appear and there’s a regularly conducted poll with multi choice responses which keeps you feeling that you’re part of what is going on.

What else helps is that the staging is so inventive and fully utilises the technology available. The use of Zoom boxes here is highly engaging and even the ubiquitous “you’re on mute” moments come up freshly minted. I was involved in a live zoomed production of Metamorphosis myself earlier this year, so I can fully appreciate just how much time and attention has been given to this aspect (click here if you want to compare). True there were some sound issues (rapidly sorted I hasten to add) in the first couple of minutes but somehow they failed to detract from the experience and might even be worth incorporating into the show permanently as audience expectations are toyed with. It’s also worth it for the ability to use the highly appropriate line in the chat function that it is all down to “bugs in the system”. But I digress… and why shouldn’t I? They did, and I’m glad of it!

Today’s bonus Scenes For Survival piece is A Soup Song by Stewart Ennis. A woman (Annie Louise Ross) finds herself on  her own trying to make her late partner’s lentil soup and afraid to assert her own independence over the ingredients. She works on, finding comfort from the task and even more from the outcome. Like the soup the piece is heart-warming.

Tower Theatre’s version of Metamorphosis (In Lockdown) is here