There’s a well known saying coined by, if the internet is to be believed, Friedrich Nietzsche – “What doesn’t kill you only makes you stronger”; modern psychology bears this aphorism out in the recognition of the phenomenon of Post-Traumatic Growth. With PTG, an individual experiences positive change as a result of a highly challenging or stressful set of circumstances in which they re-evaluate their place in the world. And this is the basis of Lila Clements’ Look, No Hands currently playing as part of the online element of the Edinburgh Fringe as part of The Pleasance Theatre’s offerings. Developed in collaboration with cycling charity Velociposse it is a warm and entertaining solo play with some distinctive features which mark it out from many other confessional shows of similar type.

Clements takes a real life incident and weaves a fascinating story of one woman’s personal growth in the wake of near disaster. Although we are presented with a character (Vee) this is clearly an account very personal to the author and the fact that it is rooted in reality only serves to strengthen the narrative. The central moment is a cycling accident in London resulting in physical injuries including a broken clavicle, ruined clothing, a loss of dignity (see previous) and some unexpected footage appearing on one of the numerous documentary series about hospitals. Perhaps worse though is the psychological trauma which is inflicted, and which results in anterograde and retrograde amnesia where the events surrounding the accident are wiped from her memory bank. This is problematic as the resulting court case relies heavily on her recollection of events but fortunately there is still enough evidence to convict the van driver and everyone can move on. Except Vee/Clements finds this difficult as she is haunted by questions about what actually happened, has realistically horrifying dreams and struggles in vain to form memories of what occurred. But she also feels a liberating sense of euphoria and empowerment, a new found resolve not to put up with BS and a positive desire to take control over the trajectory of her acting career. She likens it to the freedom she once found in riding her bike in more youthful days, speeding down hill and, sometimes, letting go of the handlebars. 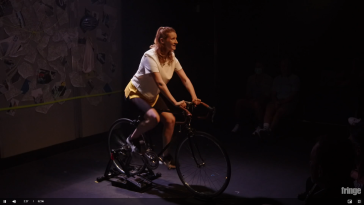 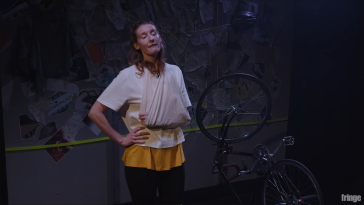 It’s a very clever extended metaphor about a human journey, given visual clarity by there being an actual bike on stage such that the effect can be demonstrated. Anna Ryder’s sympathetic direction and some pinpointed lighting from Jenny Roxburgh ensures that there is always something interesting to watch as we listen to the story unfold. There is some point of view video used occasionally and the story plays out against a shattered backdrop which neatly parallels the fragmentation of memory which is a central concern of this piece. The narrative also echoes this by being non-linear. As well as the accident itself, the hospital stay and the resulting court case, there is copious back referencing to first cycling exploits which put into context some of the later experienced joy at being in control of one’s own destiny. Clements is a skilful and sympathetic raconteur neatly pointing out that one of the positive outcomes of the accident is the very play that we are watching. This gives a very neat and pleasing circularity to the play with its celebration of human indomitability, and which examines human cycles of achievement as well as the more prosaic ones with handlebars.

Today’s bonus Scenes For Survival piece is First Things. Val McDermid is a name usually associated with writing crime fiction. This is a much gentler piece in which Elaine C. Smith plays a radio presenter, a good listener who finally gets to talk about what is troubling her. Movingly written and performed it centres on an experience which many people will have lived through over the last eighteen months.

Look, No Hands is available via the Edinburgh Fringe Festival click here

One thought on “Look, No Hands (Online review)”