With the Edinburgh Fringe now entering the home straight there is still a good deal to see and enjoy online although time is fast running out to pack everything in. Another couple of random choices proved to have more in common than if I’d planned it that way. Marrying Jake Gyllenhall and Sugar are solo plays of about an hour’s duration written by their respective performers and dealing with the relationship experience of a modern American woman. Both start out in a generally lighthearted vein but have concealed depths of emotion that creep up on the viewer and take them by surprise when they perhaps least expect it. 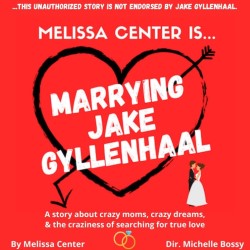 Marrying movie star Jake Gyllenhall is an aspiration rather than a factual account from the pen of Melissa Center. It actually starts life as her mother’s idea although it gradually becomes an obsession with her too. This is fuelled by the regular mother/daughter phone calls on Sundays and the six degrees of separation coincidences that keep cropping up in the actor’s life (remember when it used to centre on Kevin Bacon?). All of this starts to convince her that there is some sort of predestination involved. She thinks he just might be attracted to her if they can only hook up and starts to show a tendency towards stalking and fantasising a non-existent relationship. Finally, they meet briefly at a public event – or do they? I couldn’t help wondering if this too was all part of an elaborate scenario cooked up by a fevered brain. 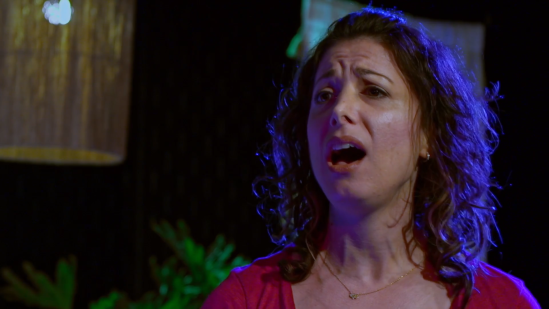 Gyllenhall doesn’t, you won’t be surprised to learn, put in an appearance except as pictures on the backdrop screen which forms part of a plush looking New York apartment set. Indeed, for the first half of the show he is relegated to the sidelines as Center walks us through a number of other unsuccessful and even creepy dates with a procession of men drawn from dating apps. My initial reaction is that all this went on for far too long but on reflection I think the point here is that her dissatisfaction with the outcomes of these encounters feeds into her imagining a more perfect future with someone unattainable. As such she becomes a somewhat unreliable/unaware narrator. There is even a section where she reports the ongoing harassment of an ex to the police (only to find herself being objectified by the duty officer) but fails to see that her own behaviour may need to be controlled. As an actor Center shows range throughout covering all the various characters in the piece to varying degrees of success. Scenes are interspersed with some songs she has written with Jamie Buxton that supposedly develop the ideas further but didn’t really add all that much to the mix. In the last few minutes we enter fantasyland completely; although this was supposed to make for an upbeat ending I didn’t think that it worked.

Mabel Thomas is the writer/performer of Sugar which takes a similarly confessional trajectory and also begins as comedy eliding eventually into tragedy in the second half. Thomas plays May (or possibly Mae) who gives us a series of anecdotes from her childhood before getting to the heart of the matter although, again, they prove to be relevant in showing how the central character comes to a difficult point in their lives with baggage attached from the past. In May/Mae’s case this is a heavy dose of manipulative behaviour with a large side order of entitlement and a sprinkling of moral turpitude. She will do what it takes to get her own way; even at the age of eight she realises she can flirt her way to success and is more than willing as a young teenager to cheat her way to exam achievement. Eventually, of course, she comes unstuck though I was unsure whether we were supposed to sympathise or think “aha, just desserts time”.

May/Mae becomes introduced to the online world of sugar dating through a website called Secret Arrangement (and that really exists!) in which so called sugar babies can interact with sugar daddies/mommas as a way of boosting income in return for companionship – at least that’s what it says in the blurb. Although May/Mae tries to lay down some ground rules she finds herself with a so called salt daddy – a man who has no intention of honouring any such arrangements. In pretty short order, she finds herself sexually, emotionally and financially abused. It’s a cautionary tale well handled by Thomas who switches from the comedy of the early scenes to the horrible experience which unfolds in the second half with assurance and skill and which kept me engaged for the duration.

Both pieces are worth attention although I think Sugar was the stronger offering of the two. If like me you’re running short on hours of the day I’m sure these pieces will be turning up again at other festivals after Edinburgh; at least in this day and age we can access anything, anytime and that’s got to be a positive advantage.

Today’s bonus Scenes For Survival piece is The Banshee. A wannabe author has a bad case of writer’s block but becomes obsessed with a next door neighbour’s cries of pain which eventually provide inspiration. Julie Wilson Nimmo delivers a sure footed performance in a creepy comedy from writer/director Greg Hemphill