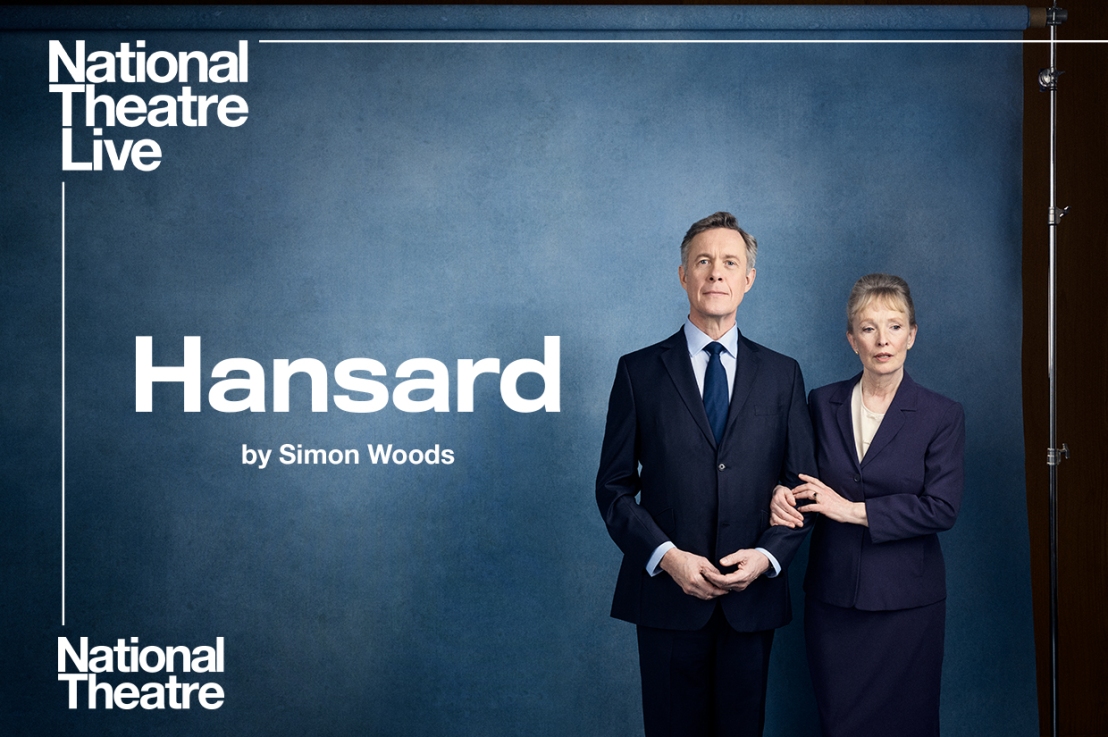 I’ve been somewhat busy of late with the Camden and Edinburgh Fringe Festival output and have therefore neglected my weekly visits to National Theatre Online. On returning I was pleased to see that they had added Hansard to the growing list of productions; it was a play I had seen via National Theatre Live at the cinema, so I knew I was in for a treat  coming back to it again. 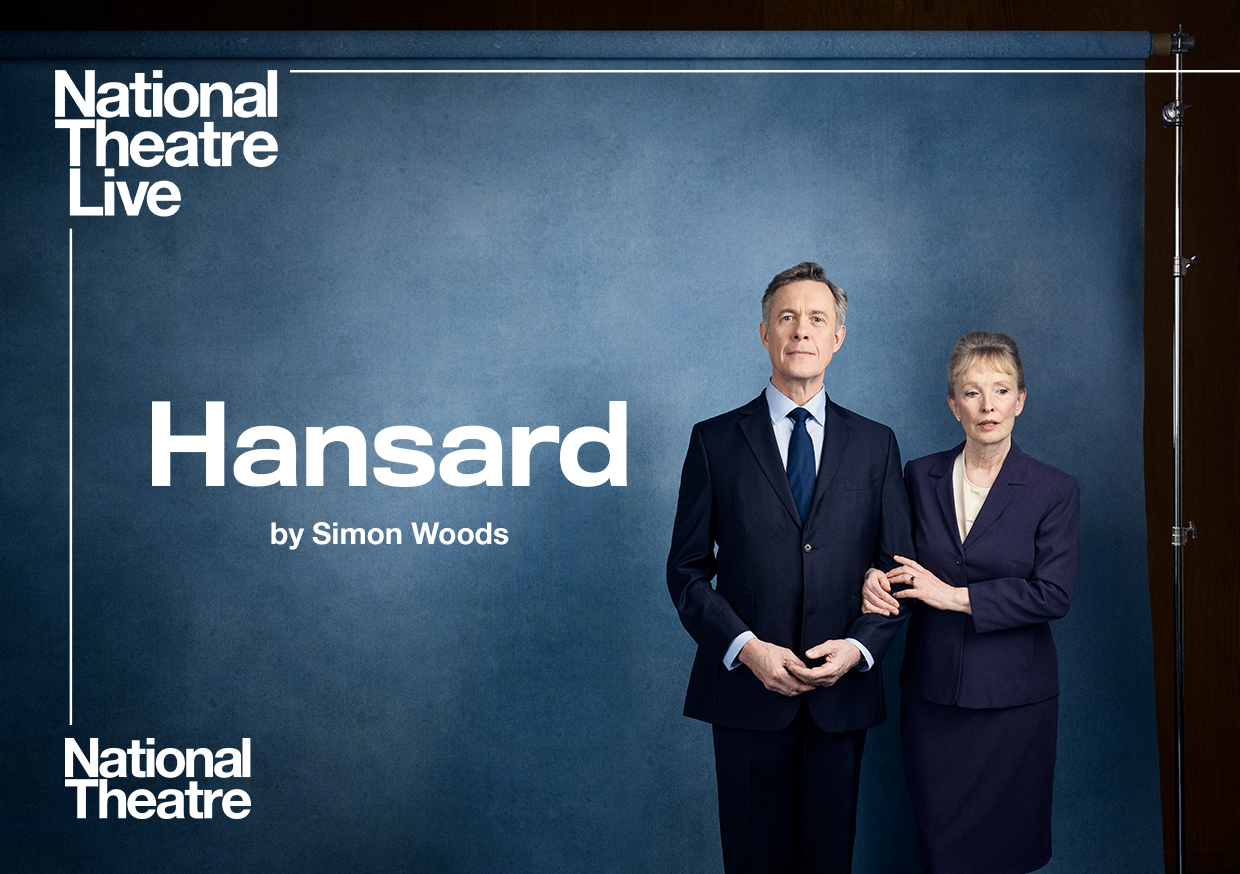 The play by Simon Woods, remarkably a debut and an assured one at that, is a duologue between a husband and wife; Robin is a Tory politician while Diana is his stay at home and rather more liberal leaning wife. They are at home in the Cotswolds one Saturday morning in May 1988. The infamous Section 28 has just been enacted and the play’s precise location in time is eventually important to the plot. Before we get to this though (in the last half hour) there is a substantial section of coruscating dialogue where the pair systematically rip each other to shreds over matters of politics, class, ambition, relationships, the arts and, basically, anything else which they can think of. And there are plenty of parallels to more recent events which raise gales of laughter from an appreciative audience. Both Noel Coward (Private Lives) and Edward Albee (Who’s Afraid Of Virginia Woolf?) are heavily invoked; Woods even borrows the trope of the absent son from the latter and gradually this becomes the central focus of the ongoing battle. The piece is wisely played straight through although the sudden transition towards the end to the private grief the pair have suffered could have been hinted at more heavily earlier in order to make this seem a bit less clunky. As it is there is a sudden need to re-evaluate almost everything that has gone before.

If nothing else the play is a golden opportunity to indulge in a double masterclass of great acting from Lindsay Duncan and Alex Jennings who attack the material vigorously and demonstrate consummate timing and nuanced delivery. Duncan’s Diana is rather dead behind the eyes (why, eventually becomes clear) and there are strong indications given about her succumbing to alcohol which only serves to fuel her jaundiced view of the world. She is holed up in her house and fails to provide the support her husband craves and to which he feels entitled. She suspects he’s having an affair if only because she was once the “other” woman. Meanwhile Jennings’ portrait of the junior Tory is less clichéd than might be feared though his subservience to Mrs Thatcher’s ideals and an innate streak of philistinism shine through – the theatre is a waste of time and as for reading a novel, forget it. His main concern seems to be whether he will be remembered for achieving anything in the future as opposed to becoming a footnote in the parliamentary record – the Hansard of the title. Although he starts out as quite buoyant, if permanently at odds with the foxes invading the garden (Brexit metaphor??), it is his character that seems to eventually plumb the greater depths of despair.

The set from Hildegard Bechtler is pitch perfect and fills the wide expanse of the Lyttleton stage  – so perhaps it’s a little more than the country cottage indicated. I particularly liked the wall of cupboards suggesting how things from the life of the protagonists had also been shut away. Director Simon Godwin doesn’t allow the pace to flag and situates the pair at either side of the stage visually confirming the distance between them. However, this does give rather the air of a tennis match to proceedings with verbal volleys flying back and forth; the broadcast technique of flicking from one actor to another all the time does become a little wearying and needed to encompass more variety. 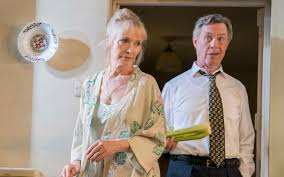 This state of the nation play set in 1988, performed in 2019 but still relevant in 2021 is, on a second watch, a little uneven. However, it is a joy to watch for the chance to see Duncan and Jennings in full flow. She’s already taken on Private Lives (with Alan Rickman) and he’s played in Virginia Woolf on the radio (opposite Juliet Stephenson). It would be great to see them together in either one or the other… or preferably both!

Today’s bonus Scenes For Survival piece is Call To Adventure. This is a neat nine minute musical (complete with its own chorus line) by Finn Anderson. Erin’s about to reorganise the office seating so where will that leave Mark and Austin’s (Lawrence Smith and Ronan Burns) burgeoning relationship? Cleverly put together with some hummable tunes – loved it and could have done with more

Hansard is available on National Theatre At Home – click here

One thought on “Hansard (Online review)”