One of the huge advantages of online theatre over the last eighteen months or so has been being able to catch up with plays that any self-respecting reviewer should have seen but for whatever reason hasn’t. My Night With Reg was first produced in 1994 (missed it), has been revived since (missed them) and even turned into a TV film (guess what?). Its latest incarnation was just this past summer at the new Turbine Theatre in Battersea where, like many a show at the time it fell victim to the pingdemic. It is this version which is now being streamed “as live” by stream.theatre before it becomes available on demand. Having grown used to starting and stopping video at will it was slightly disconcerting to return to a system where you have to be in your seat by the specified time and there is no stopping for loo breaks, but at least it went some way to replicating the in theatre experience. 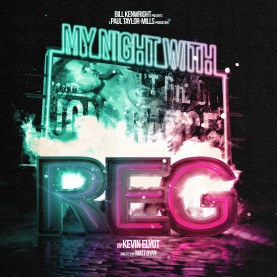 When the play first appeared, it was hailed as groundbreaking in its depiction of the AIDS crisis of the 1980s and great things were expected of writer Kevin Elyot. AIDS/HIV is never directly referenced but the portrayal of a group of gay men and their often promiscuous lifestyle leaves the audience in little doubt about what causes the two deaths which punctuate the three scenes of the play. Pervading the action throughout is a sense of loss and an aching melancholy for the past which has only grown stronger in the nearly forty years which have since passed from the drama’s setting. Indeed, much of the talk at the gatherings around which the first two scenes are structured (a housewarming and a wake) are full of Proustian moments symbolised by the collection of books, records and houseplants which central character Guy has acquired over the years and which dominate Lee Newby’s very well realised set. Time and place are also evoked with various cultural references. Bowie’s Starman features heavily and it isn’t long before it becomes apparent that all the character names are somehow connected with Elton John (though Eric remains a mystery).

Guy is the lynchpin of a group of friends but has trouble making real contact with any of them. He has harboured a crush on John for years but he’s too busy pursuing Reg who is in a relationship with Daniel but has also had one night stands with both Bernie and Benny (themselves a couple). It’s a tangled web of intrigue with Reg at its heart and Elyot’s clever ploy is to leave this character firmly offstage and have the repercussions of his behaviour played out by the rest of the characters. It’s a trick employed by both Beckett (Waiting For Godot) and Ayckbourn (Life Of Riley), but Elyot makes it his own here and it’s so much more satisfying to envisage Reg for ourselves than see him appear. The final character who is heading to being another catalyst for the group is Eric a young decorator who in various ways and to varying degrees attracts the attention of the others. And here Elyot is aping himself; his earlier play Coming Clean (this time I had seen it) deploys exactly the same trope although the young man is a cleaner rather than handyman. The idea is better realised in the later play, but it is rather a blatant piece of repetition. 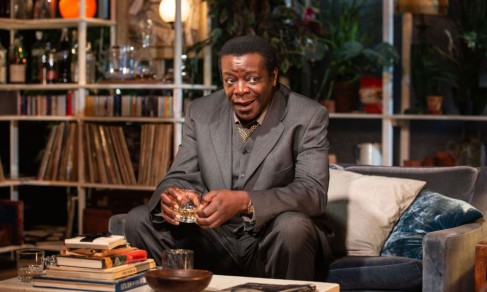 I didn’t find that this production ever really took off which, after all the years of waiting was rather a shame. There were some good individual performances going on though even some of these were marred by what I would call too much “acting” (e.g., moodily staring into the distance) and a tendency to play the lines for laughs – which mostly didn’t come. Comedian Stephen K. Amos (Benny) was an honourable exception but then of course his day job means he knows exactly how to land a punchline. The problem is the predatory nature of his character makes him distinctly unlikeable. Alan Turkington (Bernie) and, especially Gerard McCarthy (Daniel) have various degrees of cliché to contend with and don’t always come out the winners. It’s really left for Paul Keating to pull the piece together much as his character Guy does in the play. Keating’s portrait of a man who has always been lonely and is terrified of staying that way is touchingly done and with plenty of telling detail. It provided a beating heart to a piece that at times seemed rather arid. I’m not sure whether that is a fault of the text or the production, but I suspect the latter; there genuinely seemed to be a very good play in there somewhere but it was rather struggling to get out from under Matthew Ryan’s often lacklustre direction.

One aspect that really militated against enjoyment and appreciation was the video soundtrack. For reasons I still haven’t worked out it is plagued at alarmingly regular intervals with rumbling noises. These are very distracting, especially in the elegiac and reflective atmosphere of the last twenty minutes and which had a tendency to appear at all the wrong moments. While quality in online theatre has not always been first class, this is a paid for professionally produced show and the quality of that aspect should simply have been better – or, at the very least, acknowledged up front. I’m perfectly prepared to admit that the above may well have shaded my reaction to the show itself, but I did feel more than a little disappointed with the outcome. Perhaps I should set my sights on seeing it again to test that theory; trouble is I don’t really want to wait another twenty eight years to find out.

My Night With Reg  is available via stream.theatre – click here