Lately and rather belatedly, I’ve been making regular forays into the cache of monologues available via the Golden Age Theatre website and uncovered a number of intelligent dramas which look at some modern concerns surrounding Covid, gender roles, #MeToo, police corruption and Brexit. Two further examples widen further the range of present day topics covered even though one is based on a character from Shakespeare and the other on the life of a real person who died over seventy years ago. In both cases writer/director Ian Dixon Potter uses the scenarios to make some salient points about life today.

Iago is a modern updating and retelling of Shakespeare’s Othello framed through the prism of the Black Lives Matter movement. The subject of the narrative enacts his revenge after being passed over because of what he believes is positive discrimination – in this iteration Cassio as well as Othello is black and it is clear that Iago thinks that neither man should have been given preferment. It soon becomes eminently clear that along with bigotry and prejudice he is subject to jealousy, ironically the emotion with which he plans to skewer his commanding officer and wreak vengeance. The storyline proceeds much in line with the original with the embittered villain treating the rest of the characters as puppets as he manipulates events towards the tragic outcome. However, recordings on a mobile phone become a key part of the evidence against Desdemona and the (in)famous strawberry spotted handkerchief is transformed into a Covid facemask – a clever reworking for today’s scenario. 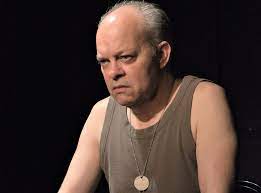 Neil Summerville, who must surely be Golden Age’s most employed actor, plays Iago as a blunt Yorkshireman who evidently relishes the destruction he is only too keen to deploy and is determined to cause the maximum pain he can. The character is presented as a calculating malcontent who is more openly villainous than the other characters I have seen Summerville play but carried out with the same level of conviction. As Iago is Shakespeare’s third longest role (after Richard III and Hamlet, who are at least given prominence in the plays’ titles) it seems entirely appropriate to hear his point of view. It’s a confident retelling that borrows somewhat from Tim Crouch’s  reframing of other Shakespearean characters’ narratives. The ending though, is marred somewhat by events having to be narrated rather than shown directly and therefore some impetus and sense of the tragedy is lost.

Summerville takes centre stage again in The Triumph Of Evil. Given the title and that everything I’ve seen him do in this series so far has cast him as a thoroughly unpleasant type with a massive chip on his shoulder (or even several) I was expecting yet another villainous portrayal. Instead, we are presented with a real life character who tried to do good in the face of unmitigated evil. He plays Count Folke Bernadotte, a member of the Swedish royal family and diplomat who spearheaded a move to rescue prisoners from the Nazi death camps. Although he succeeded in ensuring the liberation of over 30,000 people, he continues to exhibit concern for the millions he was unable to help. He is telling us his story in 1948 and is reflecting on how Hitler came to power and indeed how his evil regime was allowed to flourish through the inertia of any organised opposition and the propensity of many of us to watch uninvolved from the sidelines. The title directly references Edmund Burke’s statement (though that provenance is now disputed) “The only thing necessary for the triumph of evil is for good men to do nothing”. Bernadotte did not sit idly by and, post war, continued his humanitarian efforts by becoming involved in the Palestinian question which unfortunately cost him his life. This was particularly poignant on a day when another committed politician was murdered while carrying out his duties.

It makes a pleasant change to see Summerville playing a largely unsung hero though he seems to me to be marginally less comfortable doing so; here and there words seem to be being reached for. The monologue meanders rather as it abandons the detail of Bernadotte’s story and tries to introduce philosophical discussion about whether nature or nurture is responsible for the flourishing of evil – or is it all down to religion? It becomes evident that the story has been chosen so that comment can be made on our modern day situation. Dixon Potter makes references to “unscrupulous politicians” and being led by “bullies and posturing narcissists”. I simply can’t imagine who he might be thinking of!