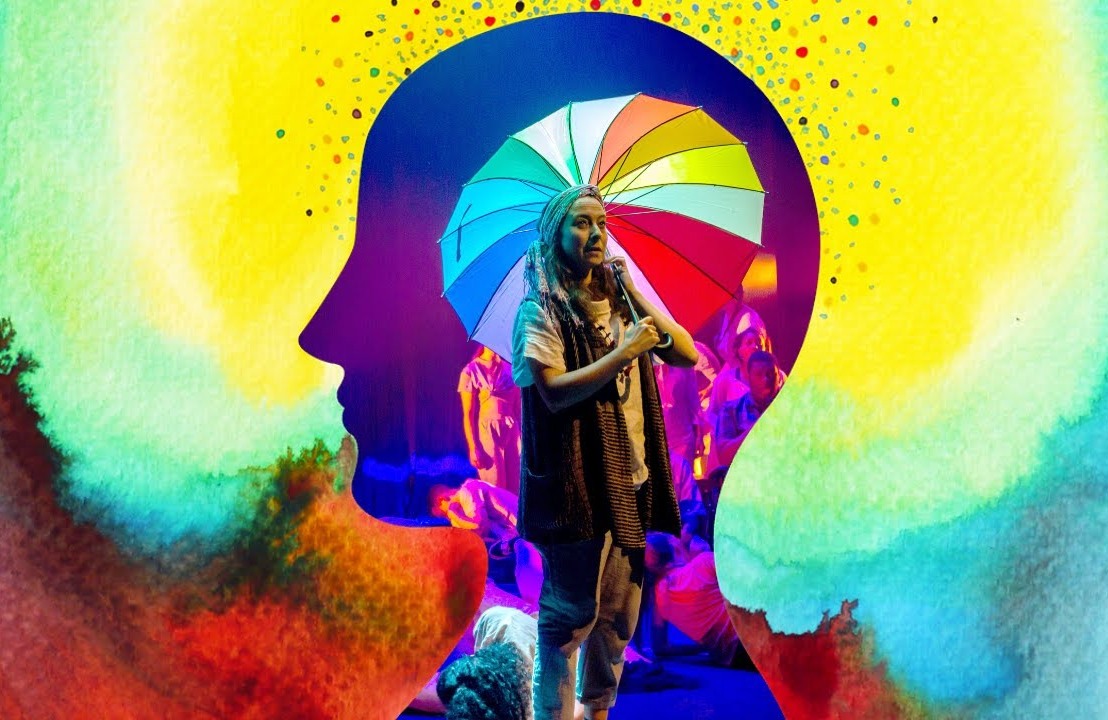 There was a time, around the early part of summer 2020, when there were so many online shows being released that it was impossible to watch many of them – even for someone consuming content at the sort of rate I was. Many of these were recordings which came from times well before the pandemic and were not always specifically filmed with any sort of public release ever being in mind. Rather they consisted of footage designed to be kept in the archives of a venue or company as a record of shows past. But when it became difficult to record new material because of social distancing rules, they had the dust blown off them and were sent out into the world to keep the flag flying. One of the earlier adopters of this methodology was the north London young people’s theatre Chickenshed who put out a piece of new/old content about once a month. Although I got to see quite a few of these, there were some that didn’t make it onto my shortlist at the time. But one of the advantages of recorded theatre is that it can still be viewed quite a while later and so I was glad to set about going back to those I had missed. 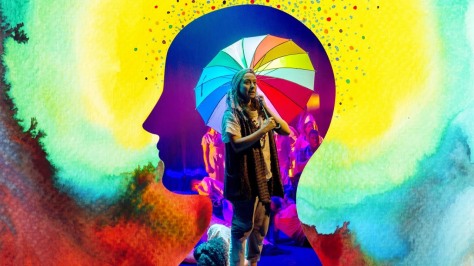 First I turned to 100% Chance Of Rain which was originally Chickenshed’s spring show in 2019. Their annual shows became renowned for centring around a topical issue important to young people and this one is no exception focusing on mental health concerns; as such it still has relevance. All the well-recognised Chickenshed tropes are evident – a strong emphasis on movement and dance, integrated musical numbers, the sheer number of well drilled participants and in lieu of an actual narrative, examining a topic from a number of angles. To be precise there are seven “scenes” which look at issues such as self-harming and obsessive behaviours, contributory factors like the rise in single parenthood, the explosion in online gaming and the number of people who find themselves uprooted from their own heritage. Threading the scenes together is a monologue from fictional expressive arts therapist Liz Abulafia (Belinda McGuirk) who offers commentary and even some practical solutions as coping mechanisms. The show starts, for instance, by inviting the audience to participate in some calming breathing exercises. 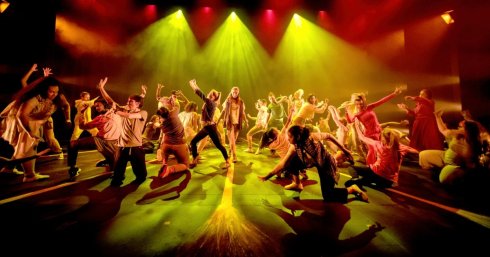 Given that the show is an explosion of energy from that point on, this seems a wise way to start proceedings. Another way to tackle mental health problems is through physical exercise and this is amply demonstrated throughout the various sections as dozens of performers organised into groups arrive to give their all to their particular section. And it’s a show that considers the aural as well as the visual dimension too. Chickenshed’s Vocal Voices choir perform four numbers throughout the show which include a haunting version of Amy Winehouse’s “Back To Black” – an interesting choice considering what happened to the singer herself. They also lead in an absolutely joyous version of “I Can See Clearly Now” which finishes the piece on a high note of optimism with its chorus of “It’s gonna be a bright sunshiny day”. The visual symbols of umbrellas which have appeared throughout give way to a literal rainbow of colours (seven of the key performers appear dressed in the various hues). It becomes apparent that subtly this upbeat ending to a difficult area of human existence has been suggested all the way through by director Lou Stein and costume designer Emma Gale.

Although it’s taken a long while to cover this particular piece of theatre, I was happy that the piece reaffirmed my belief that Chickenshed’s devised theatre offerings continue to make bold statements and that they have remained online long enough to appreciate and enjoy their messages – and the one behind this show is particularly important. I shall redouble my efforts to catch up with the rest of the pieces very soon.