What with one thing and another (mostly one thing – and we all know what that was) it’s been a solid eighteen months since I last settled down in the Tower auditorium to watch a full length play. The wait was absolutely worth it as Kensuke’s Kingdom is a production of cast iron quality which left me in a degree of awe at the cast, creatives and crew for what they had achieved even after such an unprecedented layoff.

Kensuke’s Kingdom is an adaptation by Stuart Paterson of the novel by Michael Morpurgo, most well known in theatrical circles as the writer behind War Horse, but whose books have regularly been adapted for the stage. This one concerns Michael and his parents who give up everything to take a voyage round the world in their boat, the Peggy Sue. The youngster and his dog Stella (short for Stella Artois) get washed overboard and find themselves on an island inhabited by an apparently hostile old man called Kensuke. Gradually the two move from a position of mistrust and even downright animosity to a point where they become reliant on each other and form a bond of friendship.

It’s a simple enough tale of generational and cultural divides being bridged, the importance of family, the power of nature, concerns for the environment and the redemptive qualities of the human spirit – did I say “simple”? It’s twin themes of loneliness and survival also resonate with the recent experience of many, and I could spend the next five hundred words or so drawing meaningful parallels with current events, but I think my time would be better spent in talking about the production which is, quite simply, wondrous. 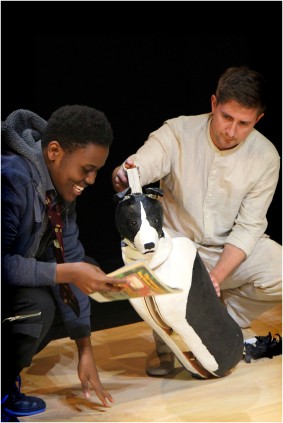 Putting on a show such as this requires dedicated teamwork and that is what this production obviously has in abundance. Helmed by the consistently inventive direction and leadership of Angharad Ormond there’s a whole ship’s company of talent steering this particular boat into safe harbour. The octet of actors simply could not be better. While much of the weight falls on Muktarr Samura (an A Level Drama student making his Tower debut) as Michael, he creates a believable twelve year old who finds himself growing up fast. There’s excellent work too from Matthew Cranfield and Sangita Modgil as impulsive dreamer dad and responsible captain mum. The three of them form a tight knit family unit completed by Paul Graves’s fabulous interpretation of Stella who in the way that dogs have is always at the heart of the action but never becomes obtrusive. I have to confess that, already knowing the book, when I heard that Tower was doing this adaptation I was just a bit concerned about how Kenzuke might be cast. I’m pleased to say that Dale Robertson does a fine job and although it was evident that there was still a young man in there, his demeanour and general posture were enough to convince me that he was a gruff Japanese war veteran.

All the cast are assigned further duties as scene creators for which they are joined by a small but largely silent ensemble of Ruth Sullivan, Joe Lewis and Janet South – naming this trio alone tells you all you need to know about the quality of the cast. There are some stunningly realised and executed movement sequences to achieve the set changes and I don’t mind admitting that I found myself tearing up at the sheer beauty of the Peggy Sue’s construction. The other elements of the performance aspect come in the form of some absolutely stunning creations by puppet master Isaac Insley. The dog is excellent but just wait until you see the orang-utans! And one of the most moving moments of the show is the progress of the (origami) baby turtles from the beach down to the sea – and that was the other sequence that got me. It’s not much more than a brief moment in the show but it was ample evidence of the hours of love and the attention to detail which is a hallmark of the production.

Isaac is also responsible for the general set design – simple but oh so effective for the in the round configuration chosen (and which I heartily applaud). This is perfectly enhanced by the clever lighting states of Samuel Littley transporting the audience to a myriad of locations on land and at sea. Kathleen Morrison’s costumes were well thought out and I particularly liked the way that puppeteers were delineated through use of a tan colour scheme – so much more in keeping than the usual sheer black. Tamara Douglas-Morris contributed her usual high standard of composed music which integrated well with Paul Graves’ evocative soundscapes. The stage management of Roanne Insley and Jacqui Dixon ensured that the extensive number of props were all in the right place at the right time. 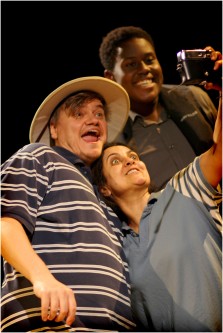 It’s good to see  Tower hitting its stride again quite so quickly and I’m personally  glad that I was able to pick things up where I left them eighteen months ago. As Morpurgo has Kensuke say in the book: “Life must not be spent always hoping, always waiting. Life is for living”.