The Original Theatre Company have found a bit of a niche for themselves over the last eighteen months producing work that they regard as theatre/film hybrids. Shows like Barnes’ People and A Cold Supper Behind Harrods have taken place on a stage even when an audience can’t be present, been streamed live into our homes and then subsequently released as an on demand product. The given examples have used and reimagined already existing scripts but for their latest piece the OTC have turned to a  new and original piece of writing, Emily Head’s The System.

It’s a psychological thriller but one that is both innovative in construction and in the recording technique used so comes up pretty fresh. With its surprising twists and turns, it is difficult to summarise without giving the game away but here goes. There has been a party during which Paul has been found dead with multiple stab wounds. Evidently it is murder, albeit one borne out of the victim’s gradually revealed controlling and abusive behaviour stemming from misguided religious convictions. DCI Hardstaff has brought the various suspects into custody and is interrogating them to get to the truth. So far, so conventional except that we never see the detective and the various interviewees are all played by the one actor, Head herself.

She does an extraordinary job conjuring up a range of about a dozen characters and switching effortlessly between them. As with all the best whodunnits, each character has a connection with the murdered man and all have their own reasons as to why they might have committed the deed. So, one moment Head is the softly spoken Irish stepdaughter of the victim, the next a flirting American and then a bolshie Liverpudlian and so on. There are no costume or make up changes so all this is achieved with little more than a subtle change of body language and/or accent and several characters are given distinguishing mannerisms – a nail biter, a bangle snapper, a hair plaiter. There are perhaps just one too many accents but otherwise it is an absorbing showcase demonstrating real talent.

The audience is firmly focused on the various characters themselves – as already stated the enquiring policeman is never seen. Instead, the camera is positioned where they would be, and the wording of the various monologues indicates what questions are being asked. In effect as we look down the lens of the camera we become the detective trying to puzzle things out and there certainly needs to be a good deal of concentration to pick up on what is happening. To say more would spoil the surprise although this perhaps comes a tad too early and (hint) if you listen carefully to the pronouns used you’ll begin to see what is occurring. 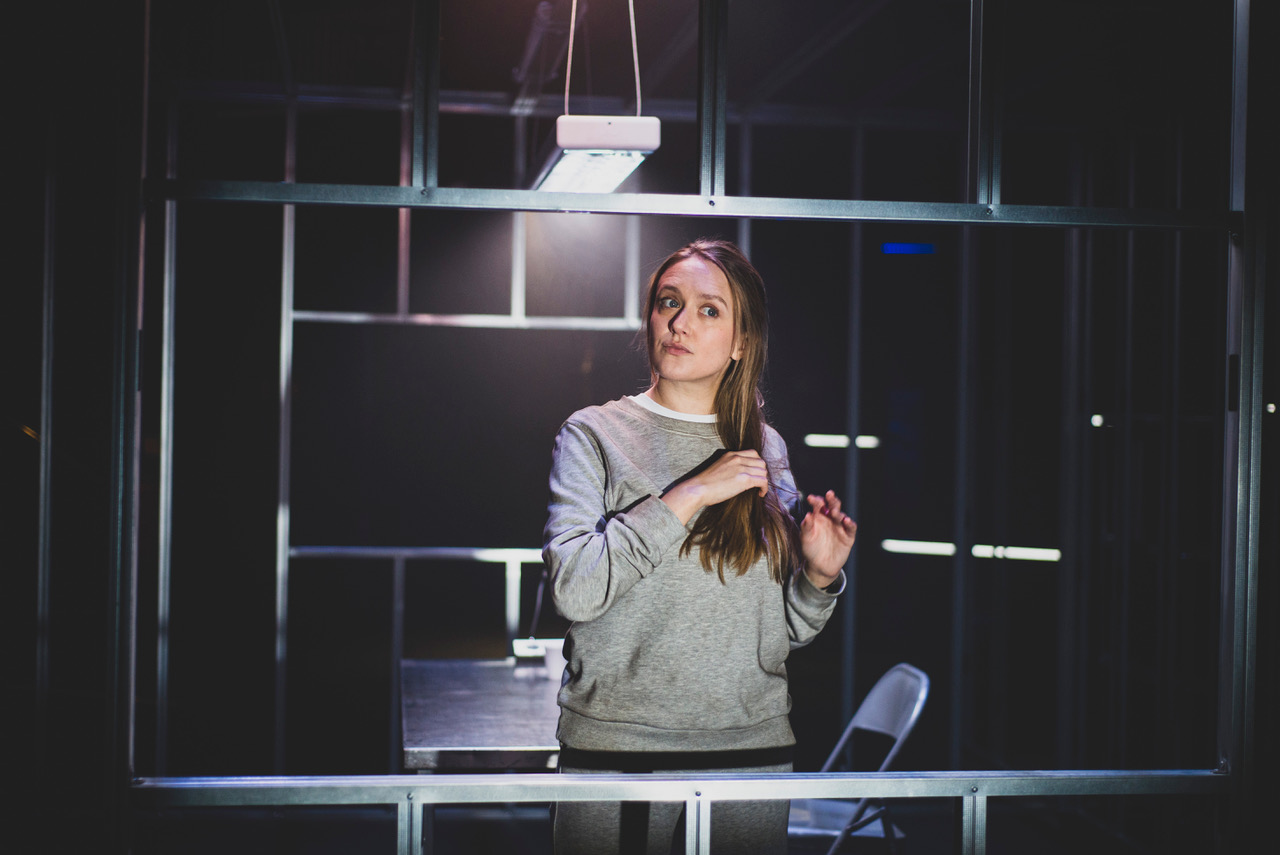 The other USP of the piece is that the whole thing is recorded in one continuous take via the Steadicam skills of Ben Eely who gives us Hardstaff’s movements and positioning even if there is no dialogue. It’s an intriguing and thoroughly cinematic idea (c.f. Hitchcock’s Rope or more recently Sam Mendes’ 1917) and is no mean feat in itself. The post show Q and A reveals that the equipment weighs in at the equivalent of three tyres so lugging that lot around for 75 minutes and being in the right place at the right time is worthy of its own round of applause. Flickering lighting (Matt Haskins) and an eerie soundscape (Max Pappenheim) work with the part cell part cage set design of David Woodhead to create a tense atmosphere. Guy Unsworth, who also directed OTC’s Being Mr Wickham, is making a specialism of this sort of hybrid work and once again proves he can deliver the goods. In a brief introduction he sets up the notion that they are going for a world record for longest single Steadicam shot; I’m not sure whether that’s been ratified but it’s another reason for engaging with this piece that is well written and performed superbly.