With the COP 26 conference underway, thoughts naturally turn to the current state of the environment, and I thought I’d spend a day or two investigating some of the online theatre pieces that focus on this topic. Interestingly they are nearly all targeted at young people rather than the adults who are doing the actual damage  – Complicité’s Can I Live? is an honourable exception. The best place to start has got to be a piece that has actually been selected for screening at the conference itself. It has a title which doesn’t mince its words: Climate Change Catastrophe.

Theatre company Cap-a-Pie (which means “from head to foot” or “armed for battle”) consulted with hundreds of children from the North of England along with scientists and engineers at Newcastle University to create a series of six short pieces which investigate various aspects of the environmental jigsaw and have backed this up with lesson plans and structured activities which follow on and will help to educate and inspire. If I say that the usual topics such as global warming and extreme weather events are present and correct, this is not meant in a spirit of criticism. Rather it indicates just how often it is necessary to reinforce the science behind suggestions of imminent disaster. The presence of academics and engineers in the consultation process for the show lends further credibility to the claims made and solutions offered. And even if some of those suggested by the children are pure fantasy they show that the issues are being seriously considered.

Each of the less than ten minute pieces are performed by Hannah Goudie-Hunter and Liam Scarth who demonstrate high levels of energy whether playing Year 4 pupils, their teachers, a pair of newsreaders or a variety of other characters; I particularly liked Scarth’s take on a polar bear whose ice floe is rapidly dwindling. They also quote the words of the various scientists/engineers connected to the project which add some context and demonstrate that they are finding ways to solve some of the issues. The messages set out are not only clear but also remarkably entertaining using movement, song and poetry alongside quick fire sketches to keep the momentum up and appeal to the viewer.  In the last section “Thoughts And Feelings” the two regular performers are joined by guest rapper Kema Kay.

Verity Quinn’s set is that of a typical classroom with plenty of those blue plastic (sustainable hopefully) chairs that are always to be found. These are used for a myriad of creations and are reshaped to form settings just as they would be in a drama lesson. And there are some ingenious reconfigurations here as they become various means of transport, quiz show podiums (should that be podia?), icebergs and they are even suspended to designate an underwater scene. In the “Microbes” section there’s some appropriately colourful artwork from the children. I did find the musical sting which pops up repeatedly somewhat annoying, otherwise Katie Doherty’s music suitably fits the bill with songs ranging from the humorous to the serious. Brad McCormick directs, using some fast cut editing to move things along swiftly. 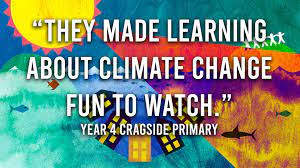 As a child’s voice informs us at the start of each piece Climate Change Catastrophe has “been made by kids for grown-ups” and they have come up with some wonderfully inventive solutions to the various problems which the politicians might do well to listen to. I wonder just how many of those adult top level delegates in Glasgow will take the time to engage with this thoughtful piece of theatre. As the total running time is well under an hour, who knows, perhaps Joe Biden and Boris Johnson might even stay awake for that long.