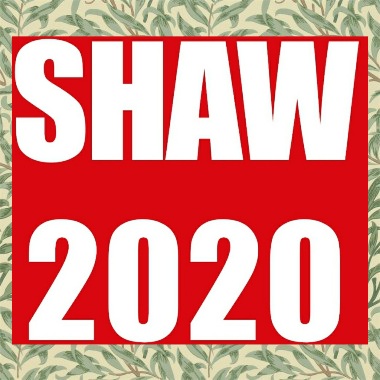 Anton Chekov, Arthur Miller, Tennessee Williams, Tom Stoppard, Alan Ayckbourn, Noel Coward, Christopher Marlowe, Oscar Wilde, Joe Orton, Alan Bennett, Henrik Ibsen…..; during the course of my online reviewing saga, I’ve watched and written about works from just about every major dramatist. When it comes to Shakespeare I have covered off the entire canon (click here). But one name that hasn’t been seen so far is Bernard Shaw, so I’m delighted to report I can now plug that particular gap. During last year’s shutdowns an offshoot of the Shaw Society put out regular video content both featuring the works of the writer and about the man himself to mark the 70th anniversary of his death. These are still all available on a dedicated You Tube channel, so I thought I’d take a look. There are no actual full plays available although that’s possibly quite sensible. Generally speaking, Shaw is not celebrated for his brevity and digital theatre constructed under lock down conditions might try viewer’s patience somewhat. There are, however, some interesting examples of some shorter works.

As this is the week of Remembrance Day, it seemed appropriate to begin with a one act play which Shaw wrote in the middle of the conflict, O’Flaherty VC. In full it is actually called O’Flaherty V.C., A Recruiting Pamphlet, an ironic title as Shaw picks apart the British recruitment drive in an ostensibly neutral Ireland in the mid war years. The decorated soldier O’Flaherty has returned to his home village to assist with this and falls into discussion with the local squire. The former tells the latter some home truths about why his fellow countrymen really sign up – in order to get away from their lives of poverty and despair. This is borne out by the arrival of his mother a politically dogmatic harridan and his girlfriend whose only interest in his commendation seems to be the money that might come with it. The two start their own mini war and it is evident that O’Flaherty can’t wait to get back to the trenches for a bit of peace and quiet.

The characters are all rather stereotyped as a shorthand way of getting to the point quickly and the dialogue of the central figure, played by Jonas Cemm, is full of “the auld blarney” and the craic. And I found myself laughing for all the wrong reasons at hearing repeated use of “at all, at all” at the end of Mrs O’Flaherty’s (Dot Smith) lines. I guess, at least, the group were honouring the words Shaw wrote but it’s sadly not his best work. The production is played out as a Zoom reading with the usual attendant technological hiccups. At one point the dialogue emerging from Mrs O’Flaherty/Dot Smith’s feed is completely unsynchronized with the visuals. The cast – if you’ll forgive the pun, bravely soldier on – but Shaw’s dialogue can be up against it and at times gets buried. There’s some thoughtful use of costume to enhance character and It’s A Long Way To Tipperary makes a poignant appearance.

Rather more successful I thought is the ten minute piece Shakes versus Shav which may well be the least performed of Shaw’s works so a rare treat it makes. Originally written for a marionette theatre at the Malvern Festival of 1949 it sets up WS and GBS as an intellectual Punch and Judy show with the two landing verbal and even physical blows at each other. The puppetry is suggested rather than actual here as the protagonists played by Will Birch and Jonas Cemm slug it out presided over by a narrator. Macbeth, Rob Roy and two of the main characters from Heartbreak House also put in brief appearances. The whole thing is over before you know it but is actually long enough to make its point and visually it is cleverly done. It is rather reminiscent of Terry Gilliam’s Monty Python animations and indeed the theme tune from that, “The Liberty Bell”, also puts in an appearance. 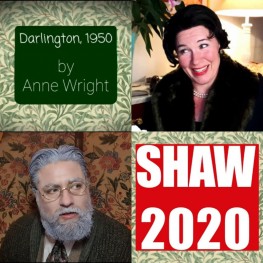 The third piece I selected, Darlington, 1950 was about, rather than by, Shaw although it still features his writing via many of the letters he wrote to Ellen Pollock. She was a favourite performer of Shaw’s and also a former president of the society that bears his name. Not that, as it turns out, Shaw really thought there should be such a society. Their letters to and fro, brought together by Anne Wright, are gently humorous and show the real affection the pair had for each other. Jonas Cemm pops up for a third time – again as Shaw (it’s a good impersonation), and Pollock’s words are beautifully enunciated by Laura Fitzpatrick. The last section of this, again, short piece takes place against the backdrop of Shaw’s beautiful looking garden in Hertfordshire which looks well worth a visit next summer.

It’s perhaps surprising that as Shaw’s work came out of copyright last year that there haven’t been more examples of his work on offer, and it must have been a major blow to the society that they couldn’t celebrate the anniversary with something more robust. However, it is good to see their work, directed by Joe Sargent,  still being celebrated trhough the latest of theatre mediums. I’m just wondering what Mr Shaw himself might have had to say about it – plenty, probably.