I was reading a news article yesterday which said that for the first time since March 2020 all London theatres were now back up and functional. A heartening prospect, as long as it continues. One of the first to break cover in this latest round of reopening was the National Theatre back in August which mounted a production of an Ancient Greek classic albeit in a radically modernised, gender blind version which announced with a clarion call that theatre was back. This production has now been uploaded onto their streaming platform for the rest of us to see.

Kae Tempest’s Paradise is based on Philoctetes by Sophocles. It tells one of the lesser known tales of the Trojan Wars as the central character is left stranded on a deserted island by Greek commander Odysseus. When it becomes apparent that in order to beat the Trojans the Greeks need Heracles’ bow, which Philoctetes has in his keeping, Odysseus takes Neoptolemus (son of Achilles) on a mission to get their hands on the item. To their surprise Philoctetes is still alive and just about surviving on the island but is naturally suspicious and reluctant to co-operate. He is also hampered by a gangrenous leg and subject to fits; even so he has achieved some sort of equilibrium away from the world of power politics in a place where he can make and control his own destiny. The play becomes a debate about freedom and captivity, dispossession and the notion of toxic masculinity. 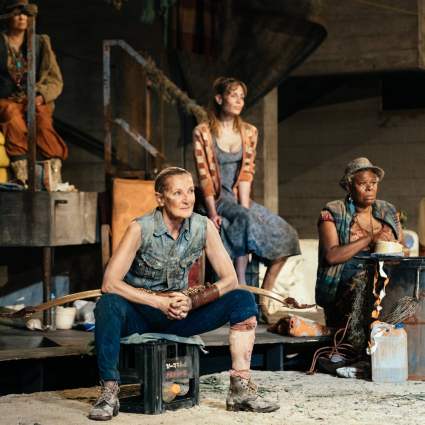 This last is highlighted by having all roles played by women and although some of the characterisation is in danger of straying into the realms of caricature, Ian Rickson’s direction mostly manages to rein things in enough in order to make the necessary points. Lesley Sharp is quite astounding in the central role. Gimlet eyed and full of swaggering machismo she delivers a full on performance of a man abandoned and betrayed but still not quite able to admit it. The voice is that of a Cockney wide boy, the stance that of a permanently aggravated bull mastiff. It’s a real demonstration of acting in the moment and strongly makes the case that the gender of the actor is irrelevant. Equally impressive is the Odysseus of Anastasia Hille; as well as the battle hardened commander there is evidence of the wily politician and arch manipulator. Gloria Obianyo starts by playing Neoptolemus as an unquestioning disciplined foot soldier but takes him on a journey of self-discovery as he finds that contact with Philoctetes starts to raise questions and moral imperatives. The whole trio speak with commendably clear diction, even when voices are raised. 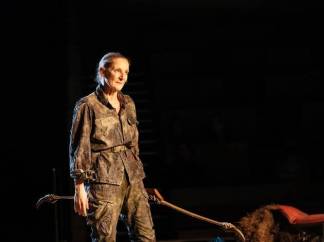 The rest of the cast form a traditional Greek chorus though they also enter the action at times as well as simply commenting upon it. This they do individually so we are spared any attempts at speaking in unison which never seems to work well. Although they form a homogenous group of the apparently dispossessed, they also are well individualised as characters by the nine actors playing them. I did get a little lost with why they sometimes seemed to be apparent to the main trio and sometimes not but maybe there wasn’t any particular reason. The set which has been constructed very much with the state of the environment in mind consists of a sandy beach straining under the detritus of the world which has been washed up on it – including the people. If this is Paradise then the definition has probably changed. However, the level of detail achieved by Rae Smith with both this and her often recycled costuming, shows the way that sustainable theatre should be heading. 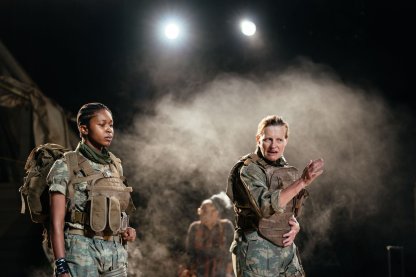 The production does have the occasional longueur and would probably benefit from being twenty minutes shorter. It is played straight through, though of course that’s not an issue when you’re sitting at home. Paradise is one of three latest additions to the streaming platform, the others being Winsome Pinnock’s Rockets And Blue Lights (audio version reviewed here) and the fabulous James Graham play about parliamentary procedure This House (review here) – that’s timely!

Paradise is available on National Theatre At Home – click here