The TV show Dr Who has now been around for nigh on 60 years and has become a global franchise/phenomenon. I well recall its rather humble beginnings as Saturday teatime entertainment and being miffed that I wasn’t allowed to see episode one because the adults wanted to watch something about some American bloke called Kennedy who had been shot the day before in Dallas. With no second TV/video recording equipment/catch up/on demand/You Tube, etc. I looked doomed to have missed the programme except that the BBC took the unusual decision to rescreen it the following weekend ahead of part two. Even then the Doctor had the power to do the unusual. (Pop quiz – Many people think the very first storyline featured the Daleks, but they didn’t appear until the second adventure. So, what was the first about? – Answers in the comments below please). Anyway, now let’s jump in the TARDIS and head for 2021 and the UNIT Headquarters in the back streets of Mayfair.

“The first rule of Time Fracture is that you don’t talk about Time Fracture”. So says Jodie Whittaker’s Doctor when she pops up at the end of Immersive Everywhere’s relaunched interactive experience, Dr Who: Time Fracture. That’s going to make for an interesting review then… To be fair though, I can absolutely see the point of the embargo as any spoilers are likely to diminish enjoyment. In any case my experience definitely won’t be anyone else’s experience as this is the sort of theatre where you go to it rather than it coming to you; no two people are going to follow the same path throughout. And it’s not a passive event – to get the most out of it you have to pitch in and engage directly with what is part play, part museum exhibit, part theme park ride and part party – never fear, there are plenty of cocktails on sale to make time seem more elastic than it already is.

The premise (I think I’m allowed to go that far) is that UNIT have discovered a destabilisation point in time and been monitoring it for fifty years. A point of final crisis is approaching, and the Doctor has proposed the audience members as volunteers who will act to get everything back to how it’s supposed to be. Thus begins a race through space and time visiting up to seventeen locations in order to solve riddles, puzzles and games, avoid the monsters and interact with characters from the Whoniverse before a final confrontation on a planet that fans of the show will know all too well.

It’s a totally bonkers outing – mostly but not always in a good way – and the forty or so actors, backed up by an even bigger support team, really invest in what they are doing. Director Tom Maller has form with this sort of event being one of the driving forces behind The Immersive Great Gatsby and Secret Cinema. He ensures that events move along with a manic energy that could do, here and there, with being toned down a little. This would introduce some notes of calm in order to give a bit more light and shade and offset the required adrenaline rushes. Notably the only real chillout moment came from a visit to the non-species specific loo. 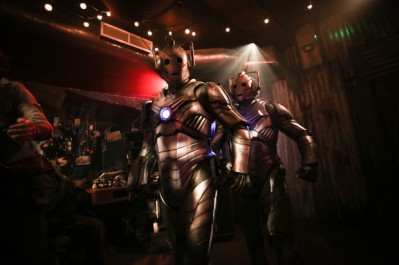 It’s almost worth trying to ignore Daniel Dingsdale’s overarching narrative itself. This is thoroughly confusing with far too many elements thrown in and no clear indication of how they are all connected – any similarity to the recent TV outing Doctor Who: The Flux is, I’m sure, purely coincidental. In a half time discussion with a colleague, it was evident that both of us had missed some possibly important elements in the middle section, me a visit to one of the show’s spin off locations and he a chat with one of the many alien life forms which pepper the show. Things also happen for no apparent reason whatsoever and there was some sort of frenzied quasi-religious festival happening at one point which was joined in by many of my fellow “travellers” (obviously the enlightened ones) while I and several others watched on perplexed. Not that any of this absolutely matters in the end and if you’re really desperate to see and hear all, then it’s a good incentive to return. However, it did leave me feeling that I might have missed some of the best stuff.

What is unquestionably fabulous is the whole area of design (Rebecca Brower) where imagination runs as free as for the TV series. Costumes, some on loan from the BBC, are right on the button and the make-up stands up to really close scrutiny. The settings while retaining some of the shonky quirkiness of the originals are cleverly done with delightful “Easter egg” touches meaning you have to look really closely at everything particularly any paintings or tapestries. The lighting too is brilliantly done with Terry Cook’s designs creating some wonderful effects. There’s a close encounter in a dark corridor which will definitely have you jumping out of your skin and is probably the show’s stand out moment.

While I really enjoyed some aspects of the event it probably wasn’t as much as I’d hoped/anticipated largely because of the incomprehensibility of a lot of what was going on. While this was partly down to the script it wasn’t helped by being quite so loud and frantic for a lot of the time. The first section particularly seemed to consist of a lot of people in white lab coats shouting and getting upset with each other although it wasn’t always clear why. Perhaps I’ve just reached that sort of age where background noise becomes overwhelming. After all I can remember distinctly watching that first ever episode and hiding behind my (metaphorical) couch way back in November 1963 – now that really is time travel!