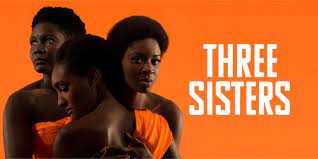 Having confessed a few weeks ago that I’ve always found Chekhov a bit hard going (here), I resolved to give his  work one more go in the shape of his play Three Sisters by reviewing a production available on the National Theatre At Home platform. In fact, what I saw was only “semi- Chekhov”. Name checked in the virtual programme ahead of its Russian originator, Inua Ellams is credited with being the key playwright in this instance. The play has been reinvented and although the key plotline and the characters have been “borrowed”, the context has been completely changed. Instead of Irina longing to go to Moscow in 1900, we have Udo pining for Lagos in 1967.

The setting is now Nigeria in the late 1960s; actually, more specifically it is Biafra during its doomed attempt to secede from its parent country and the civil war that then ensued. The new autonomous state lasted less than three years and will mostly be remembered in this country for the images of starving children which dominated the media and the fact that John Lennon returned his MBE in protest at Britain’s involvement. In fact, history shows that the British government was shamefully complicit, supplying the Nigerian army with weapons while espousing the case of the dispossessed at the same time. At the bottom of it all lies the ongoing acquisition of the region’s oil resources. It’s fair to say that Ellams ensures that the colonial powers which made those decisions are heavily criticised. 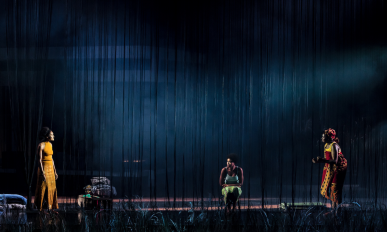 Although there is a strong military presence in the play, as indeed there was in the original, it is really about the effects of war on a specific family. The three ennui ridden sisters of the title Lolo, Nne Chukwu and Udo have been raised in the home of a general and are constantly surrounded by soldiers. The middle sister embarks on an unsatisfactory affair with one, two more vie for the attentions of the younger sister and one of these leaves the service in order to secure his future with her. Both sisters’ involvement with the military personnel ends in tragedy and this is replicated on a larger scale for the country as a whole. I actually found the oldest sister, Lolo the most interesting. A teacher (later the school’s head) she sees that the future of the newly formed country should be secured through education which stresses the importance of the Igbo culture and sweeps away the influence of imperialist forms of history which suggests that Europeans “discovered” Africa. Although doomed to face continued disappointment in her interactions with men, she shows a strength of character that is less evident in her sisters or, for that matter, in their feckless brother Dimgba. Faced with the overwhelming nature of both war and his assertive wife Abosede, he gambles away the family inheritance. The culture clash between the latter and the sisters is doubly strengthened by having her come from the dominant and dominating Yoruba culture which is ultimately triumphant on both the field of battle and within the family home.

In this role Ronke Adékoluejo takes Abosede from her rather gauche beginnings to being firmly in control and is just one of the casting successes in Nadia Fall’s well-paced and striking production. Indeed, all the female roles come across strongly with Sarah Niles’s stoicism as Lolo, Natalie Simpson’s despair as Nne Chukwu and Racheal Ofori’s hope (ultimately blighted) as Udo echoing the original but made more compelling by the desperate situation they find themselves in by Act 3. If the male roles are less memorable, and somewhat interchangeable, Tobi Bamtefa’s Dimgba and Jude Akuwudike’s increasingly drunken Uncle Eze register strongly. The design from Katrina Lindsay is truly memorable with some stunning sets and beautifully realised costumes.

Did it change my mind about Chekhov? To some extent, yes, although in many senses it is more what Ellams has done with the source material which impresses and gives events a greater sense of purpose. The stakes are so much higher in this version, and they impart an immediacy and urgency to proceedings which the original version lacks. It’s still a drama about a family but underpinned by a national crisis which sets the whole thing in a surprising and revelatory context. Of the “big four” of Chekov’s plays I’ve just The Seagull left to cover off. There’s not an obvious candidate for this but I have found a not particularly promising version from 1975 available on You Tube – so practically an original cast recording!