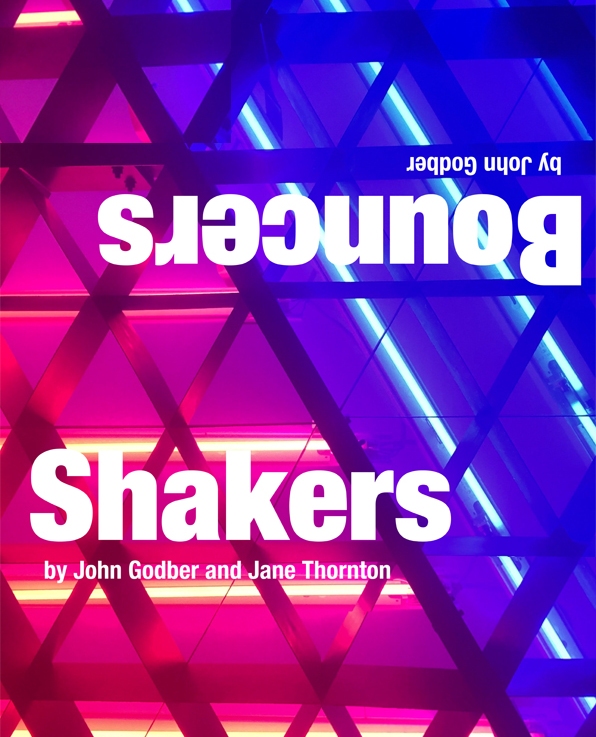 I was in trouble as soon as I walked through the front door. “Sorry, you can’t come in with those shoes” said a dinner jacketed figure pointing at what I thought was a pair of inoffensive canvas slip ons. Elsewhere in the theatre bar there were three other burly figures similarly dressed and looking equally forbidding. Meanwhile upstairs in the auditorium four pink beribboned big haired cocktail waitresses were dishing out lurid coloured liquids into glasses while jigging along to a “Now That’s What I Call Music” compilation firmly set in c. 1980s. This was just the opening salvo of fun for a double bill which examines the night life of a provincial town in both the “Shakers” bar and “Mr Cinders” disco through the eyes of some of the people who work there. Bouncers & Shakers are currently playing on alternate nights and in double bills on Saturdays at Tower Theatre, Stoke Newington. It’s a great addition to this year’s 90 years celebration programme.

Shakers by John Godber and Jane Thornton (aka Mrs Godber) was actually written as a later companion piece to Bouncers but here was up first following a musical prologue involving all eight actors. Nicki, Adele, Carol and Mel are facing a change in their working conditions. Their boss wants to get them into – and possibly out of – hot pants and that’s the thin end of the wedge; Carol declares that they will have to go topless next. While this is the spine of the play it isn’t really what it is about. For these workers there are hopes, dreams and ambitions to be pursued such as getting into acting or gaining and retaining a boyfriend. There are also pregnancy scares and fluctuating weight issues to be negotiated – not to mention the dynamics of clothes shops’ changing rooms. Insecurities are well on display. The play also takes a long hard look at the bar customers who come and go; the girls on a night out, the pretentious media types who drop in after work, the old men who remember the venue when it was a pub – much of human life is here. Arabella Hornby’s wannabe actress and Emily Deane’s possibly pregnant young woman are particularly well realised and together with Michaela Forssblad and Alexa Wall the quartet shape, age and gender shift to great effect providing moments of outrageous comedy but also intimate confessional drama. Like the cocktails they are serving it is a heady mix.

After some minimal set changes to Philip Ley’s gloriously lurid yet absolutely right décor we’re off to the disco as seen through the eyes of the titular Bouncers. Lucky Eric, Ralph, Judd and Les also have their own tales to tell and these examine the theme of toxic masculinity way before it became fashionable to do so. Like their female counterparts the foursome also embody the lives of the punters who turn up at the front door. A hen night is particularly well evoked, and I also greatly enjoyed the sequence where various partygoers arrive only to find themselves rejected and/or ejected for any one of a number of reasons. Occasionally Lucky Eric (so called as he’s the one that invariably finds the fiver accidentally left behind by a customer) steps outside the confines of the club and his role to monologue in greater depth directly to the audience. Chris Frawley adopts a more seriously intimate tone for these elements which also occur in Shakers but are there more evenly distributed between all four performers. As well as Ralph, James Johnston also plays the hilariously cheesy club DJ. Both Kevin Furness and Matthew Ibbotson’s facial expressions are priceless in a number of roles and especially when they are forced to dance together as the left over couple in one of the mating rituals which pepper the action. 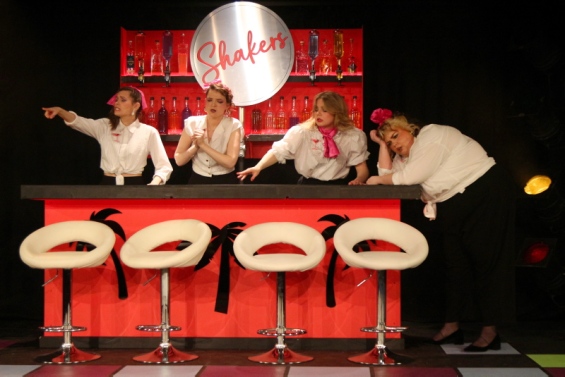 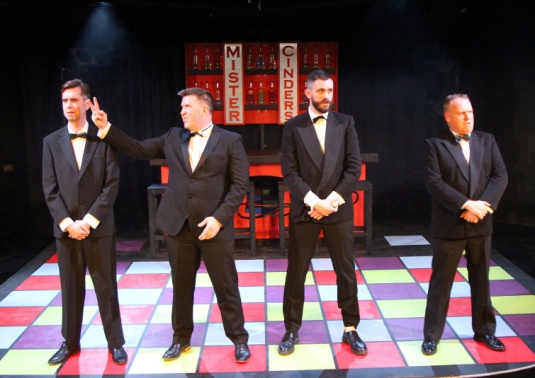 The direction of both pieces has been superbly carried out by Ruth Sullivan with a fine eye for telling detail and the introduction of some extremely well drilled movement routines. I don’t know how long it must have taken for her to string together the underlying soundtrack which is completely evocative of the era and which also makes wry commentary on the action at many points – “you were working as a waitress in a cocktail bar”, indeed. Samuel Littley’s lighting plot works well with the soundtrack to conjure up a particular era while Lucy Moss has a good deal of fun with the costumes – I was glad to see the patterned tights and white socks which were such a hallmark of the times. 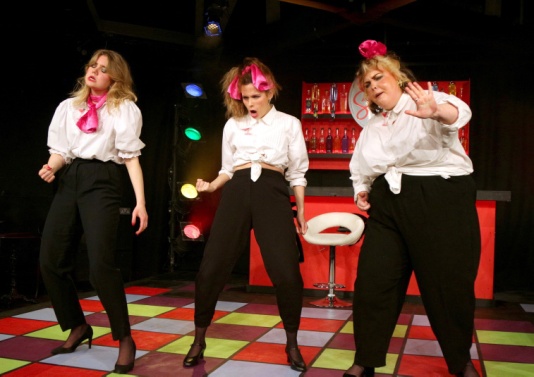 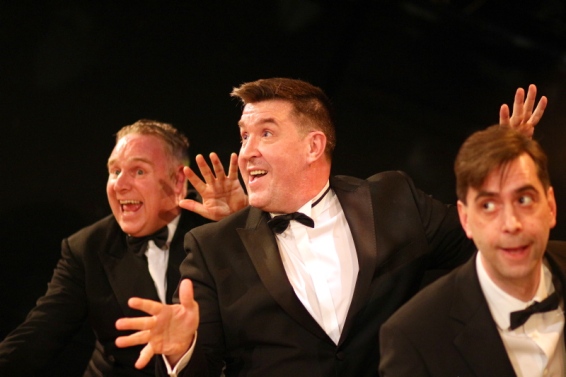 It is an intriguing idea to run these two shows back to back thereby highlighting themes and ideas which run throughout. While Bouncers is still the more robustly funny of the pair it was good to see the less often performed Shakers being given an airing and providing a counterpoint to the male dominated world of the earlier play. In a series of short scenes, the plays set out the world as it was for many forty years ago and that we can remember with a mixture of horror and affection. If you love the 1980s you will certainly appreciate the care that has been taken to conjure up this lost world and whichever way round you choose to see these plays do give yourself a good old razzle dazzle night(s) out on the town.