There seems to be a bit of a trend at the moment for venues to be welcoming back past successes. Partly inspired by the need to put on some sure fire hits to tempt audiences back into their auditoria and partly to give a fighting chance to productions that had to dodge the pandemic lockdowns, this is no doubt a good thing. And on a purely selfish note, it means I had a second chance to see a couple of well received plays that I had previously missed. Both were relatively short pieces about rather left field relationships and in which the writer(s) perform their own dialogue with assurance and conviction. 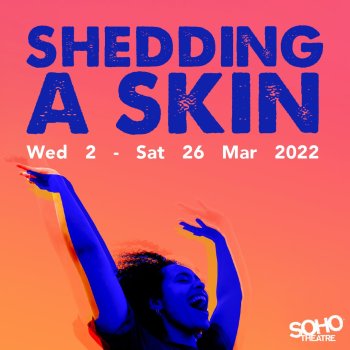 Shedding A Skin is back at the Soho Theatre after an initial run in May 2021 when it garnered highly positive critical notices. Amanda Wilkin gives us the world of Myah in her thirties and looking to find her true voice. She loses her job in a row over tokenism in the workplace, dumps her unsupportive partner and moves in with elderly Mildred on the 15th floor of a tower block. Although they are at first the traditional chalk and cheese, Myah and Mildred form a formidable double act against the vicissitudes of the world and the former gradually emerges as a more fully formed and rounded person. It’s the standard tale of the butterfly emerging from the chrysalis or, in this case, the reptile sloughing off an old skin to find something new and resilient underneath.

This is very cleverly mirrored in the staging which gradually opens out as Myah finds more confidence in herself; she ritually tears down aspects of her old life and finds a wider perspective on Rosanna Vize’s ingenious set. Eventually all is laid bare as even the stage wings are revealed and Myah stands triumphant in the destruction/rejection of her former self. There are context setting interludes between the various scenes as we are given brief vignettes of what is happening to a selection of other people; they pleasingly counterpoint the main action by gradually geographically focusing in more tightly each time. These are accompanied by some mesmerising projections from Nina Dunn. 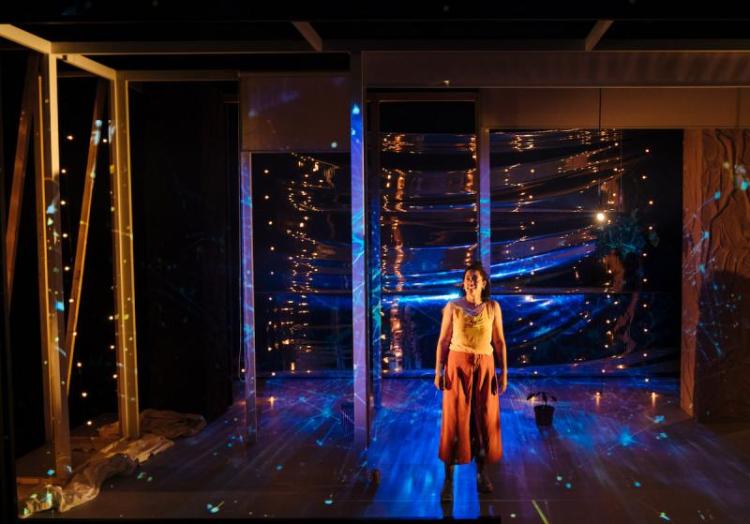 The main event though is the story telling of Amanda Wilkin who holds the stage for a full ninety minutes with unflagging energy and an intense commitment to her own words particularly as the character she is portraying grows and develops. Being a one person show all the other characters are also brought to life in a compelling narrative which has you rejoicing for Myah’s new found freedom to express herself and really live. If it gets perilously close to a stand up comedy routine at times, the Soho Theatre’s other programming encompasses that genre too,  so this is not inappropriate. I noticed that Michael McIntyre was due to play a “work in progress” set straight after Wilkin’s show finished; I don’t suppose the contrast could have been greater and I know which I would have preferred more.

Fiji at the Omnibus, Clapham is a real oddity – but happily mostly in a good way. Nick and Sam are also a chalk and cheese relationship only in their case things are rather more extreme. (Just to say I’m sorry about the apparent spoiler coming next but as this is made perfectly explicit in the advertising material, I’m figuring my spilling the beans won’t have much knock on effect). The former wants to kill and eat the latter; the latter is perfectly willing, indeed desirous, for this to happen. (I’ll just pause while you read that again and absorb the implications). Now, if that isn’t one of the most bizarre premises for a play then I don’t know what is but, brilliantly, this blacker than black comedy really works.

The play is billed as a “true crime rom com” because it is both based on a true story (incredibly) and also apes some of the conventions of the so called meet cute where characters encounter each other for the first time and rapidly fall in love. It rejoices in some deliberate but strikingly banal dialogue as the pair eat meals, paint pictures of a fruit bowl, daydream about being in Fiji and generally ready themselves for the horrific act which is to be the culmination of their weekend; much of this is hilarious in its mundanity. There are also cutaway scenes which reveal a good deal of backstory as the duo work through psychologist Arthur Aron’s famous 36 questions – listed here if you’re interested. These are based on the idea that self-disclosure fosters intimacy by revealing vulnerabilities … and boy, are these two vulnerable? Well, yes indeed they are.

Writers Pedro Leandro and Eddie Loodmer-Elliott (the third, Evan Lordan, also directs) are compellingly watchable as the willing collaborators in something so far out there it’s in danger of meeting itself coming back. Both are fully in tune with their characters and bat the dialogue backwards and forwards with a fine sense of timing and beautifully nuanced body language and expressions. Leandro has moments of tender wistfulness that undercuts the horror and switches between playfulness and earnestness with ease; he also provides a finely delivered version of Don McLean’s haunting “Vincent”. Loodmer-Elliott totally eschews the full Hannibal Lector and gives us a nursery teacher haunted by his own desires but mortally offended when he is compared to a paedophile – as though cannibalism is somehow more morally acceptable.

It’s been an interesting couple of days catching up on these two already artistically commended pieces both of which take risks in their staging and execution. If pushed I would plump for Fiji over Shedding A Skin, but I was glad to make the acquaintance of both sets of characters whose worlds seismically shift as they come to terms with their own natures.

Shedding A Skin is at Soho Theatre – click here – and Fiji at Omnibus Theatre, Clapham – click here. Each runs for just a few more days