Every now and again a new category of theatre arrives on the scene and what I saw yesterday may well be one such. Over the last decade or so site specific theatre has become popular – these usually take the form of a piece being performed in an atmospheric space (usually not in an actual theatre) which will enhance the narrative. Hence some time ago I saw a production of The Hound Of The Baskervilles which took place outdoors in a cemetery. Now there’s a new sub-category dubbed site responsive theatre. Here the performance takes place specifically in the space which is talked of in the dialogue. I’m indebted to the Eclipse company of Toronto for the following which puts it better than I could hope to: “Site responsive is when you find a space and have it reflect what story it wants to tell. It is allowing the architecture of the space to inform you of what should be experienced”.

Recently appointed co-artistic director of the King’s Head in Islington, playwright Mark Ravenhill, exemplifies this approach with his new play The Haunting Of Susan A. It is set (as indeed it must be) in the King’s Head and looks at the long history of the venue and conjectures that it may well have been one of the Inns in which plays were performed before Shakespeare et al created purpose built settings. It has also been the scene of bare knuckle, illegal boxing matches and a popular site for fringe theatre performances since 1970. Ravenhill works all this into his play and even looks forward to the time when the theatre space will move next door and where the audience currently sits will become a trendy restaurant. It’s a clever idea and fact and fiction merge so frequently that they become inextricably mixed.

The basis of the narrative is a classic ghost story. Ravenhill himself appears first to give us a low key talk on the venue’s history but is interrupted by a woman in the audience who has her own story to tell. Ravenhill retires to an auditorium seat and hands over to Susan A – played by Suzanne A(hmet)- an actress who once appeared at the Kings Head 20 year’s previously after landing a role vacated by another actor who it transpires had killed herself. This was as a result of a ghostly encounter which took place during the course of a performance with a troubled spirit from the Victorian era who was killed in an act of extreme violence within the current space.

As you can tell there’s an awful lot packed into this short piece (it is just an hour) which consistently intrigues and surprises – sometimes literally as there are a couple of jump out of your seat moments. It’s entirely eerie listening to a recounting of events (whether real or imagined) which took place just yards from your nose and makes the piece totally immersive. This was especially true for me as I found myself cast in the brief though satisfying role of tyrannical stage director Tim who had put the actor through hell during rehearsals of his play about his dead sister – luckily my Irish accent just about passed muster.

Suzanne Ahmet is excellent as the distressed and disturbed actress moving from hesitant interrupter to forceful protagonist. She embodies all the other characters of the narrative, interacts with the audience and spars with Ravenhill who only has to play himself. Ahmet scintillates; one moment she is a centre of calm, the next manic energy engulfs her as she hurtles round the stage. She creates atmosphere simply through her story telling powers. This is enhanced by sudden plunges into darkness (the theatre’s lighting board is notoriously, but in this case helpfully, dodgy), the thrumming of a sub bass and the sound of a steady drip of water into a bucket from the venue’s (real) substandard roof pervade the action and credit is due to the design team Simon Fraser (set), Jo Underwood (lighting) and Roly Botha (sound). 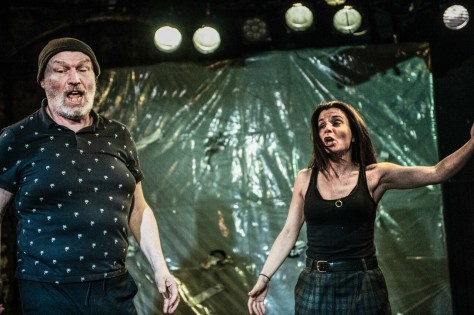 This won’t be everybody’s cup of tea, but I really enjoyed its multi layered approach. It’s an interesting homage to a venue which will shortly cease to exist in its present form but that is inextricably tied up with the history of London theatre. It’s also  a pretty good ghost story even if you can see the end coming a mile off. It is laced with very creepy moments when Ahmet begs you not to turn round though the urge is almost irresistible in the same way that you know you shouldn’t blink when watching Dr Who’s Weeping Angels; this piece creeps up you as it gradually weaves its spell. I enjoyed being a (tiny) part of it too.