What with it being Pride month and having spent the previous evening delving into some queer history (here), it seemed appropriate to take a glimpse into the future. Actually, with its references to AIDS and Barbra Streisand, and as writer Ben Kavanagh pointed out in the post-show Q & A, The Convert is not so much an attempt to predict what is to come, as it is to reflect on the present and an actual real issue through an alternative reality. In this world homosexuality has once again been criminalised and “transgressors” are rounded up into a facility where they undergo conversion therapy – “treatment or psychotherapy which aims to change a person’s sexual orientation or to suppress a person’s gender identity” (Stonewall). This practice has now been banned in 14 countries (which means there are a shed load where it hasn’t) and with our present government flip flopping over the whole matter the play’s narrative is suffused with currency and relevance. 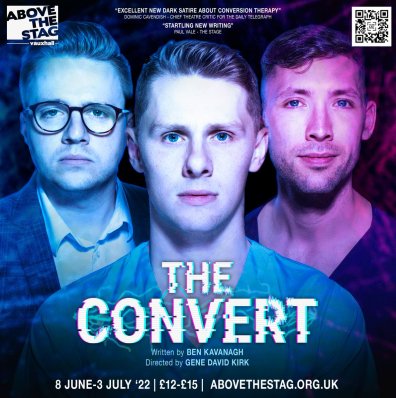 We witness the techniques through the experience of Alix; his time in the facility is marked by both physical and psychological torture as the state aims to “cure” him of his perceived disease and return him to society. The only alternative option is that he be sent to “The Other Place” – never clearly defined but clearly meant to be a terrifying prospect from which nobody has ever returned. With more than a cursory nod to both 1984 and The Handmaid’s Tale, we are in dystopia central especially with the figure of Alix’s case worker/torturer known simply as The Arbiter (cf O’Brien/Aunt Lydia). Actually, the text which first sprang to my mind – and which was pleasingly neatly referenced at the start of the second half – was Anthony Burgess’s A Clockwork Orange and its section on aversion therapy. Surely it is no coincidence that the central figures in both that and The Convert share the same name. 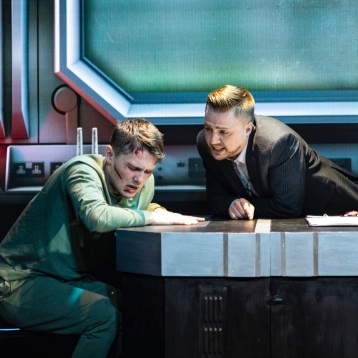 Apart from scenes of electroshock therapy, most of the physical violence takes place between scenes. The evidence though is all too readily observable with a particularly brutal reveal at the start of Act 2; whoever is doing the make up for the production deserves a programme credit of their own. The mental cruelty is deliberately foregrounded as Alix is subjected to humiliation, indoctrination, degradation and brain washing. At first resistant and non-compliant, the system conspires to break him down through both overt and covert means. The latter is achieved by introducing Marcus into the mix who professes that he volunteered to be cured and is set up to act as an exemplar to his younger cellmate. Is this genuine or is he a state plant designed to trap Alix and/or hasten his trajectory back into society or towards the dreaded Other Place? The tension here is cut through by having the two men start to form a relationship as they come together in their distress. I found this aspect difficult to reconcile logically. The state apparatus would almost certainly be monitoring activity and it is just too much of a convenience to the plot that their shared room is the one place where they can talk and act freely. However, the arc of their burgeoning relationship contrasts neatly with the horrors of the confrontations between Alix and The Arbiter; it is these which really held my attention. 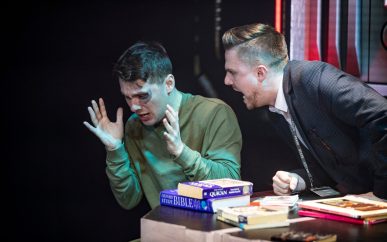 All three actors deserve plaudits and have created a fascinating trio of characters which drive the narrative. Nick Mower, who is making his professional debut, is fearless in his portrayal of a rebel with a cause and managed to convey both steely determination and vulnerability throughout. He also manages a slightly bizarre finale with aplomb though I’m still puzzling as to what it actually meant. Sam Goodchild as Marcus has the least showy part and provides moments of calm in between the horrors. But for me it was writer Kavanagh himself who really stood out with his portrayal of The Arbiter. Some playful enunciation masks his character’s icy precision and conviction as he goes about his deadly and inhuman business; there are shades of Pinter’s One For The Road here. More than once a satiric black humour is deployed to wrong foot both his victim and the audience . Thus, Kavanagh makes of him rather more than a token representative of the system or a one dimensional villain; he’s written himself a cracking part – and why not? 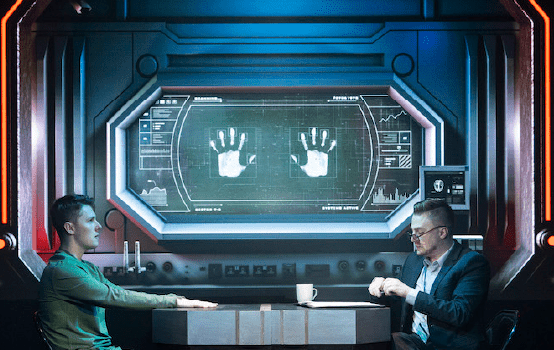 The other strong aspect in Gene David Kirk’s pacily directed production is the various design elements which combine to create what appears to be an impenetrable bunker (David Shields). The immersive sound and lighting (Paul Gavin and Joseph Ed Thomas) create an electric atmosphere and are actually added to by the ominous sound of (real) trains rumbling overhead. Above all the brilliant video work by George Reeve looks like it must have cost 70% of the budget and would not be out of place in the West End; get there five minutes before the start to absorb some of the background to what you are about to watch. Even without the rest of the show it is absorbing and thought provoking stuff and that’s saying quite a lot. It would be hard to leave this show without a clear sighted view about the iniquitous practice it highlights and a sense that it could all to easily happen hangs heavily across the Vauxhall venue – powerful stuff indeed!