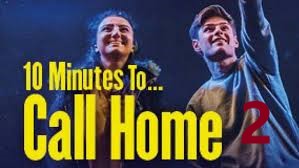 Playing catch up with the long since premiered series from Live Theatre titled 10 Minutes To… Call Home, I have reached the middle three short plays. What immediately strikes is the inventive variation of format that the pieces employ; in this section alone, we have a pastiche playlet, an audio drama and a monologue delivered direct to the audience. This is certainly something which helps to keep the nine play collection fresh and engaging. 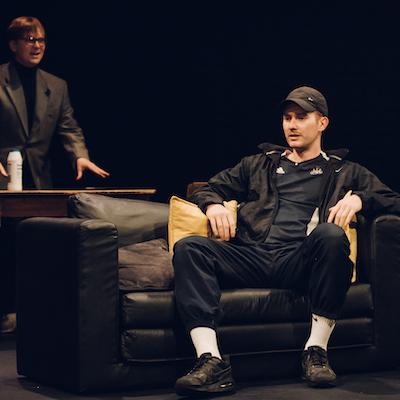 Blyth Spirit by John Hickman owes more than little debt to one of the most famous of Noel Coward’s plays. While the title employs a homophone to point up the difference, the plot is essentially the same, albeit given a rather more modern twist. Matty (Mitch Donaldson) wants to check that his mother is comfortable in the afterlife so calls on the service of Ghost Hunter Ian (Adam Donaldson) to be his conduit to the spirit world. Like Madame Arcati, Ian utilises a spirit guide to make contact. Matty is surprised to discover that this is James Dean though his excitement is short lived as it turns out not to be that James Dean. Nor is it his mother who returns to communicate with him in ghostly form but Georgia (Serena Evans), a brash young woman with whom he had a rather different connection. As in Coward’s play, Matty soon wants rid of the troublesome ghoul (“Who are you calling a ghoul?”) so it’s up to Ian to do the deed; he does but with predictably crass results which involve a large stuffed bird of dubious provenance. While it’s not essential to know the original, there’s definitely more fun to be had out of Hickman’s script if you do. It’s an amusing enough take on a familiar storyline which could do with a bit more tightening and polishing but there are some smart and funny lines such as when Matty offers ghostly Georgia a drink only for it to be pointed out that it will go straight through her – “You still got IBS?” he enquires.

Although Sheltered also has moments of light hearted humour it generally adopts a more serious tone as three women take cover in an air raid facility. In this alternate reality, Britain is at war and night time bombings are a regular occurrence. Young Ruby (Jude Nelson) would prefer to be down the pub where she hopes to meet Andy rather than staying with her mother Vicky (Judi Earle) drinking tea and playing Monopoly. But putting safety first means they have little option. Then there’s a knock on the shelter door and very rapidly everything changes; the all-clear signal clearly carries a significance on a personal level. Rebecca Glendenning-Laycock packs a lot into a short space of time and captures the playful repartee between mother and daughter, but the outcome is perhaps a bit too clearly sign posted. Director Meghan Doyle has opted for a script in hand audio play format (though filmed); one of the most fascinating aspects of this is seeing the carefully organised foley artist (presumably the Dave Flynn credited with sound) going about his business and creating atmosphere. The onset of war in Ukraine probably lends this piece an unfortunately greater significance than when it was first aired.

Though the third in this tranche of plays has a Zimbabwean setting it takes as its central theme the very European folk trope of the wicked stepmother. Mandi Chivasa’s poetic monologue piece examines the internal conflict and pain of Moyo, a girl growing up in a repressive household where punishment is severe and words are used to wound. At least they are for her; her more favoured siblings have no such restrictions. Amai Vangu – My Mother (the second half of the title is a translation of the first) is a portrait of a young woman’s escape from the clutches of an older whom she refers to as a witch. A simple walk down her garden path one day leads her to freedom and a better life. Shvorne Marks plays both women and switches between them effortlessly; she is particularly good at showing us the repressed pain of the younger. Maria Crocker keeps thing simple by directing this monologue as a straightforward piece of story telling which doesn’t need frills to get its message across.

There will be more to come next week as I return for the last three plays. Now I’ve finally got round to reviewing the series, I’m making them last!