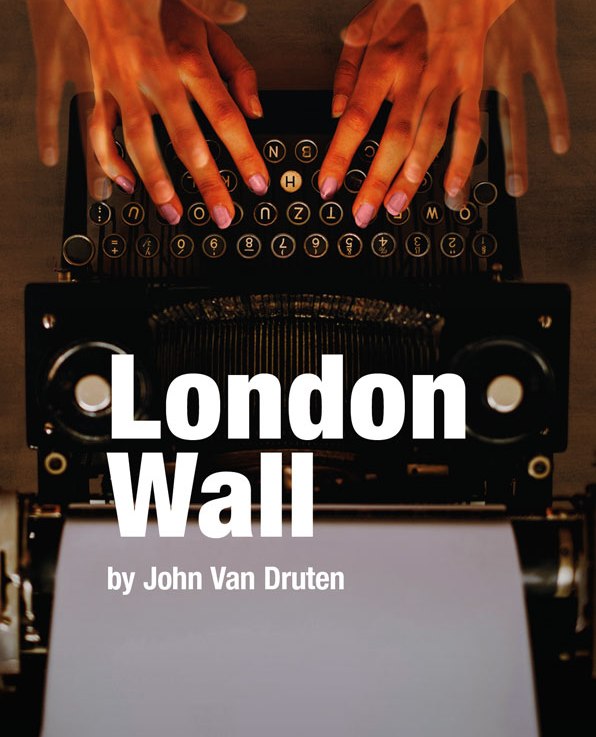 I was reading an article the other day about one of the most popular films of 1931, Trader Horn. One of the first Hollywood films to be shot on location in Africa, it included the immortal line “The natives are restless tonight” and clearly thought it was being remarkably liberal by having a character declare, “They’re not savages! They’re just happy, ignorant children.” At a time before society in general became rather more aware of the rights and feelings of others it is not unusual to encounter such examples of bigotry and prejudice. With that in mind I rather expected that a play from the very same year, John van Druten’s London Wall currently playing at the Tower Theatre in Stoke Newington, might follow a similar trajectory; as it transpired, very far from it. 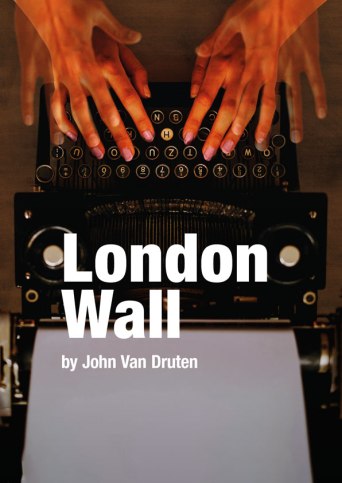 Viewed through the lens of nearly a century of “progress” the play comes across as remarkably forward thinking and more than ready to challenge the status quo which existed at the time (now?) on the subject of women in the workplace. It is set in the offices of Walker Windermere, a busy solicitors firm in the City with a relatively new fangled typing pool inhabited entirely, of course, by female workers eking out a living on skeletal wages. Personal lives have to be sublimated in the expected quest to become a cog in the machine (what boss Mr Walker refers to as “automata”). Office supervisor Blanche Janus (Stephanie Farrell) has worked there for a number of years but is unlikely to see her career (if such it can be designated) go any further. She has a degree of authority but has reached the proverbial glass ceiling and, at the tender age of just 35, is beginning to feel under appreciated in both her work and private life. Into the office comes new recruit, 19 year old Pat Milligan (Eloise McCreedy); the former, perhaps recognising a younger version of herself, takes the latter under her wing. This is none too soon as odious office lothario Mr Brewer (Nick Edwards) – interestingly his age is never mentioned – is on the prowl for his latest conquest and has naive Pat firmly in his sights. True to the standards of the era he wines and dines her but expects a reward which it appears he is willing to forcibly extort. But Miss Janus and Mr Walker (Jonathan Norris) are ready for him and between them swiftly take back control. True to the form of the well-made play the crisis is averted and Oscar Wilde’s well known dictum “the good end happily, and the bad unhappily” prevails. 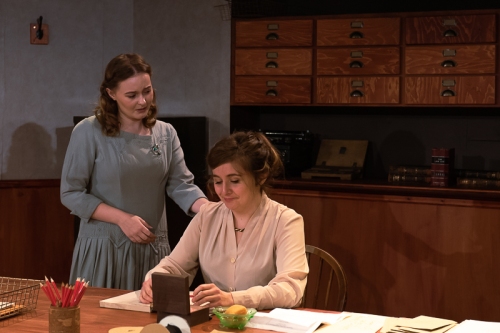 If the premise seems a little well worn it is made interesting by van Druten’s and the cast’s command of character. They are both well drawn and well played with each of the already mentioned quartet giving well judged performances which help to raise them above mere types. It’s often easier to portray villains than good people, so Eloise McCreedy does well to avoid the victim stereotype while Stephanie Farrell radiates a quiet assurance deliberately masking Miss Janus’s inner turmoil as both her place of work and her long term relationship contrive to keep her in her place. The secondary characters are perhaps rather more sketchily constructed but here too, the players do what they can to create figures which are more fleshed out. Alison Liney scores a hit with her litigious client and I was thankful that company newcomer Sandy Miller successfully steered his office junior, enjoying the salacious bits of the divorce cases, away from Dick van Dyke cockney excess. 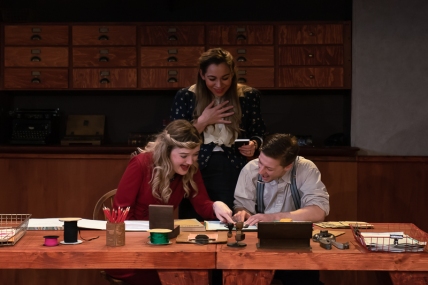 The office setting is stylishly realised in Phillip Ley’s set design with location changes handled well by the stage management team. There’s plenty of period detail to be enjoyed, in particular an impressive looking telephone exchange system neatly encapsulates the era, which is further enhanced by Sheila Burbidge and Peter Westbury’s redolent costume design. I’m not sure who was responsible for the hair design (maybe the actors themselves) but this too helped to successfully set the overall tone. 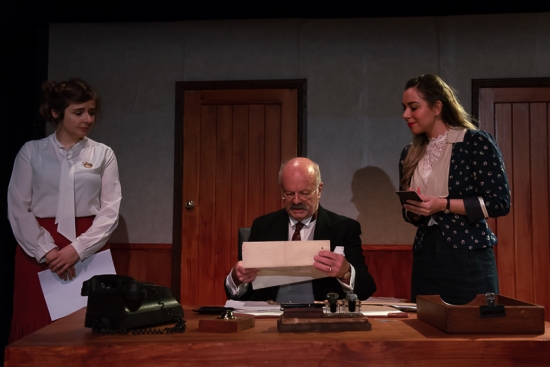 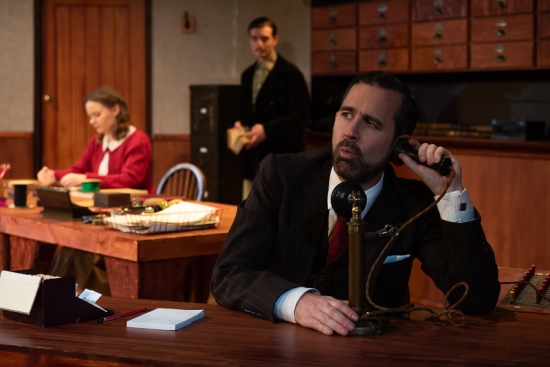 London Wall has been seldom revived since its premiere in the interwar years and it was interesting to hear some of the condemnatory vocal reactions from the audience to the predatory behaviour on display. I guess these would have been less muted back in 1931 but the playwright was making a bold point and may at least have given his original playgoers pause for thought. Originally due to have been staged before the pandemic hit, this carefully and lovingly crafted production has been gestating as a project for director Stephen Brasher for a very long time. It is to his credit that he has steadfastly seen this vision through and that the end result has turned out so successfully.