Because of its central premise, over the last 70 years The Taming Of The Shrew has become increasingly difficult to stage. Many ingenious ways have been tried to solve the “problem” nature of the play including suggesting that Katherine’s change of heart is ironic or by pairing the play with John Fletcher’s The Tamer Tamed in which Petruchio gets his comeuppance. The RSC’s latest solution is to gender invert. We’re getting increasingly used to gender reversal, gender blindness and gender fluidity on stage but this production from 2019 takes things one stage further towards, I suppose, its logical conclusion and flips the whole society on its head. 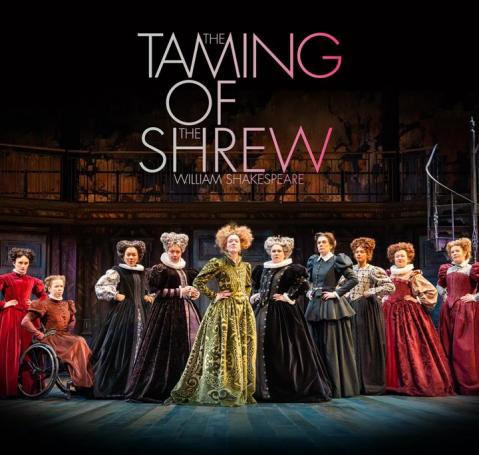 Thus, we find ourselves in a reimagined 16th century Padua where a matriarchy holds sway and it is the women who wield economic power – and swords – while men are subjugated. All of course, except for one man whom society ensures is forced from shrewishness into compliance through the interventions of a feisty woman. And in the subplot a gaggle of women pursue a young man – this really is the “new normal”. To embrace the production concept this means that many liberties have had to be taken with Shakespeare’s text. Pronouns are transposed and many of the character names are altered – Petruchio becomes Petruchia, Lucentio becomes Lucentia, Bianca becomes Bianco and so on. Baptista, although now a mother, remains Baptista and Katherine retains the name Katherine (surely it should be Katherino) so the conceit is not entirely consistent. The production also retains Petruchio/Petruchia’s male servant Grumio, for reasons that I could not work out.

The general direction of Justin Audibert, Stephen Brimson Lewis’s settings and, in particular, the gorgeous costumes of Hannah Clark keep things looking very traditional. After so many Shakespeare updates and reimaginings this will probably please many; except, of course, the production is deeply untraditional at a more profound level. Although the plotline itself unfolds pretty much along the usual lines, the gender inversion gives added frisson to many moments of the play especially when physicality comes into force or the psychological abuse is in full flow. And here the problem nature of the play manifests itself; abuse is still abuse whether perpetrated by men or women and gender inversion doesn’t get round that awkward fact.

However, the play is what it is, so setting scruples aside does the production work? Sometimes, but not always. I found Joseph Arkley’s Katherine somewhat underpowered and certainly didn’t see enough initial shrewishness to justify the character’s reputation. That said, he delivers the submission speech at the end with clarity and real feeling; I couldn’t help but reflect on the irony of giving the play’s most prominent speech to a man but…. Claire Price has a delightful tiggerish bounce and swagger which makes for a convincing Petruchia but her cruel streak never really fully emerges– it all come across as a bit of a lark and she’s clearly in it for the money. Amanda Harris as Baptista is a dominant force but otherwise does not do anything particularly new with the character. I found Emily Johnstone’s Lucentia rather unmemorable and Laura Elsworthy’s Trania rather too pantomimish. I did enjoy James Cooney’s turn as Bianco revealing the brattish spoilt side of the character; he does a particularly good line in hair flicking exits. I also rated Sophie Stanton as Gremia, a part which can seem rather insipid but which she reminted into something truly amusing with some nice running gags with a recalcitrant sword and even more recalcitrant speech endings. I should here just also mention the inspired gliding round the stage which Stanton has perfected (courtesy of movement director Lucy Cullingford?); a lovely touch which holds the attention whenever she moves. The RSC are becoming increasingly inclusive in their casting, so Amy Trigg plays Biondella from a wheelchair and Charlotte Arrowsmith BSL signs as Curtis; both actors fully enhance the scenes they are in. 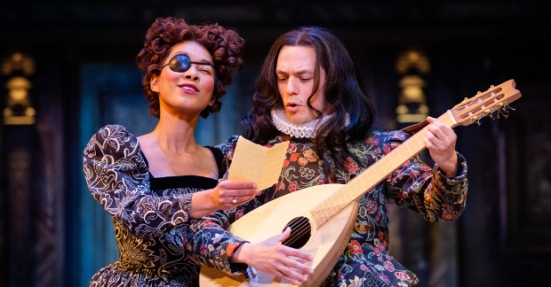 The real disappointment is that this production largely isn’t funny, mostly because the cast seem often to be straining for laughs; the whole thing could have done with more of the light touch invention shown by Sophie Stanton. Shrew is a play in which nearly everyone is pretending to be someone or something else and the production lacked the farce element which this implies. The penultimate scene should really reach fever pitch as the deceptions start to unravel and this just didn’t happen. Nevertheless, this is an interesting production for the dominant conceit on display and perhaps deserves attention on that score alone. I wonder what the RSC will do with this play next time round. As they seem to have considered every other angle how about something age blind?

The Taming Of The Shrew is available via Marquee TV. Click here

4 thoughts on “The Taming Of The Shrew (Online review)”