Way back in mid-June, when we were starting the process of emerging from the first national lockdown, I had reached 100 days of consecutive online theatre viewing/reviewing.  I chose to watch what turned out to be the first in a series of shows, Doing Shakespeare from the Northern Comedy Theatre. Emergence from Lockdown2 has just occurred and, somehow, I have now reached the dizzying heights of 250 days. So, I thought I should celebrate similarly by returning to watch another of the company’s online offerings – their play Doing Whodunit. 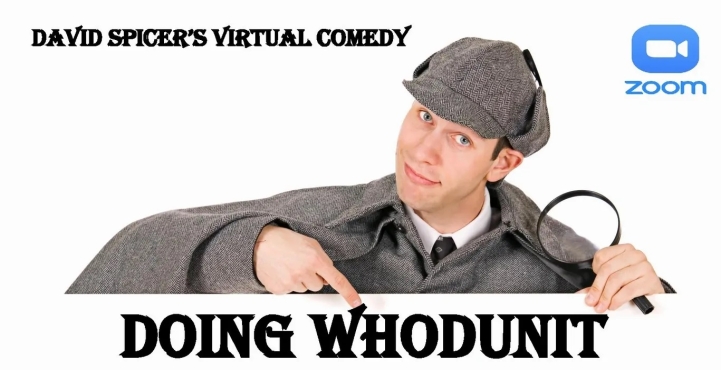 The company have found themselves a particular niche with these online comedies as they have also investigated the online pub quiz, book club and business deal as well as a Halloween special and a forthcoming look at Christmas. All of these have been written by David Spicer and form a funny insight into how these pastimes have fared during this most unusual of years. Like many a good comedy, they tap into what’s going on in the lives of their viewers with a talented team, many of whom play variations on the same characters in the sort of tradition that harks back to the “Carry On…” films.

This time round they have whodunits in their sights. There has been a bit of an online theatre vogue for interactive murder mysteries and I’ve attended enough of them to recognise and enjoy the tropes which go into their make up. Generally, you join a team (sometimes prearranged, sometimes random) of like-minded people marshalled by a detective figure in a particular setting, you are then presented with a case of locked room murder and set about the task of solving the puzzle by questioning suspects/witnesses who gradually reveal enough clues to help you reach a conclusion. Essentially, they are part theatre and part game and some of them have been quite ingenious. In Doing Whodunit all of this is mercilessly parodied.

Thus, we have the Golden Age Murder Mystery Theatre Experience company who are presenting their corporate murder evening ‘Murder by Frog’. It’s a hugely hammy affair with a continually exasperated Terri (Kathryn Chambers) as the host with the obligatory deerstalker who introduces the mysterious murder of Sir Reginald Cliché which the participants have to solve. To do so they get to interrogate a number of inappropriately cast “actors” fleshing out the suspects. There’s the Venezuelan widow (Vikki Earle) who sounds like she comes from Bootle and the German professor of  Herpetology (Rob Hardie) whose wig does nothing to disguise his relative youth. Their cause is not helped by their audience which, in this instance consists of just two (when there should have been thirty) of the Sunbright Conservatories PLC task force who have been given the experience as an end of year work bonus. The pair of them (Robert Stuart-Hudson and Kieran Maleedy) fancy themselves as amateur detectives but persist in missing the most obvious clues  and asking all the wrong questions much to the frustration of Terri in particular. Matters further go into decline when it is discovered mid-show that Terri’s partner, the writer of the piece and slated to appear as Butler…the butler, has really disappeared. The rest of the team have to improvise furiously in order to cover the gaps. 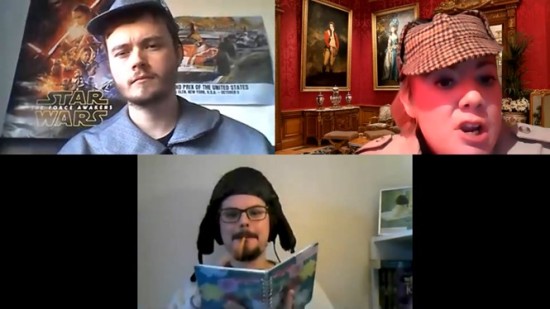 Spicer’s script and Shaun Cambers’ direction accurately pick up on the shortfalls of this type of online drama and the various characters are all recognizable types within the genre being sent up. The fact that the piece is played out over Zoom both within the narrative and in actuality means that any glitches and errors become a natural part of the proceedings; even the dramatic (dun dun derrr!) musical sting played every time the word “Murder” is used is often appropriately slow to come in.  Although what I saw was a recording it was originally played live so perhaps a little of the edge has been lost but its good to see it being presented in the raw without obvious editing so that it retains the feel of being live. As there should be in any good murder mystery there is a clever metatheatrical twist at the end. As one of the online “participants” puts it “I certainly didn’t see that coming”.

Doing Whodunit  is available via the Scenesaver platform – click here