Audio theatre seems to be undergoing a bit of a revival right now with big names such as Alan Ayckbourn and Mike Bartlett writing/adapting specifically for a genre that leaves the imagination free to roam. As the latter recently put it in The Guardian: “Artistically, it offers a more satisfying outlet for dramatists right now. It is the one form of drama the pandemic can’t touch, which means we’re not held back. You can do a fully formed piece of audio that would be the same as if we weren’t in a pandemic. You don’t make any compromises.” And so, I’ve tried to make it a regular feature of my online reviewing that from time to time I “go audio”.

Blackbox Theatre Company have recognised the value in all this by repurposing a previously staged play into an aural experience in the shape of The 39 Steps. In fact, they have actually gone one stage further. The piece was originally presented as a radio play on the stage so effectively we have a radio play within a radio play. The conceit is that it is the snowbound winter 1962, generally recognised as one of the worst weather events to hit the UK. Everything is locked down (how familiar) and the planned live broadcast of the classic spy thriller is put in jeopardy when the cast start phoning in to make their excuses. It is left to the radio producer and his assistant to create the broadcast between them and to help they commandeer the services of the tea lady to play all the female parts and do the sound effects. Fortunately, the assistant has done some am dram and can do voices – his female companion is rather more reluctant. 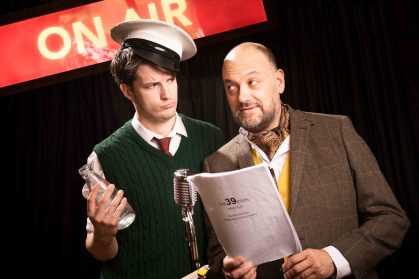 It would seem that the stage (sorry sound booth) is set for some comedy, but this neat framing device is only used at the start of the play which seems to me a waste of a good concept. Once the broadcast itself gets going it is all smoothly done and despite her concerns tea lady Brenda seems more than equal to the task so the recording proceeds smoothly and none of the expected comedy emerges. There is some humour in the main script itself but I think the play never decides quite what it wants to be and fluctuates between a straight retelling and pastiche which effectively cancel each other out.

Adapter Chis Hawley has gone back to the classic Buchan story rather than the various wholesale rewrites of  the famous Hitchcock film; though I did appreciate the nod made to this version in the opening narration. Although there are still some minor departures from the original it is more a less a straight retelling with the stiff upper lip of the hero Richard Hannay well to the fore. The central character is supposedly played by erstwhile producer of the radio play Julian, who is actually Bruce McIntosh. He has a very smooth delivery with a voice quite reminiscent of Gyles Brandreth and anchors the production with a believable portrayal of this man on the run. As indicated Scarlett Briant plays all the female (and some of the male) roles while David McCulloch takes on the men – and the dogs. The latter has rather too many Scotsmen to portray to really ring the changes; it is one area which would really would have benefitted from being able to see some physical transformation. However, Briant and McCulloch play an impressive range of characters and certainly help to bring the story to life; I’m assuming that some of the dodgier accents are deliberate.

The real problem for me, however, is that much of this approach has been done before. The conceit that one person plays Hannay while two other actors play all the remaining parts is the same as the concept in Patrick Barlow’s famous stage version which ran in London for years.  Without a visual dimension to rely on and no return to the framing device the piece basically lacks a USP to drive it forward. That said, if you’re after a well-made audio drama that harks back to the classic era of radio plays and that makes no great demands on the intellect, then you’ve probably come to the right place.