“A hit, a very palpable hit”. It may seem odd to begin a review with a quotation from the Bard of Avon (and please feel free to take a stab at which character is saying it in the comments box below) but this one is appropriate because that is what Northern Comedy Theatre has on its hands. After a one night premiere of Doing Shakespeare on home territory last week, they have whisked the show straight down to London with a two week run at The Bridewell – appropriately just across the Thames from the recreation of the Globe and, by all accounts, the storage point of the original timbers when Shakespeare’s company dismantled their building, upped sticks from Shoreditch and set up home on the South Bank.

It’s a joyful piece of theatre to take us out of the misery of lockdown, celebrating not only our national playwright but also the scores of amateur societies such as the Felching Players who have waited so long to get back on stage – as, of course, have the NCT themselves. However, they are not exactly new to this play. There’s a full account of its genesis in my interview piece from last week (click here) but in brief it was first presented as a Zoom play quite early on in the first lockdown after which four sequels were spawned known collectively as the Doing… plays. It was one of the very first pieces to emerge that used the idea of a Zoom meeting itself to create the context and provide a good deal of fun into the bargain. The conceit was that this ragbag of acting talent (and I’m referring here to the Felching Players, not the NCT itself) were coming together to perform a Shakespeare play online but, due to an “administrative error” on the part of the director, plus a healthy dose of wilful misunderstanding by others, they had all prepared different plays.

Now that obviously wasn’t going to work on a live stage, but writer David Spicer (“with a bit of help from William Shakespeare”)  has come up with an ingenious way round that, which I won’t spoil here but which makes it all too probable that the same situation arises. What to do? Well, obviously in the best traditions of “the show must go on regardless” and the fact that they have been waiting for an age to start restrutting their stuff, they decide to forge on. To achieve this they mash up the various bits they have learned with some cod, improvised and basically meaningless speeches; as far as they’re concerned the audience won’t spot the difference anyway. This leads to an increasingly manic second half as we see them putting all this into practice with Shakespeare being diced, sliced and put through a mincer and Spicer’s script becoming an ingenious labyrinth of some of Will’s best bits. Thus, when Lear asks the question “Which of you shall we say doth love us most?” we don’t get responses from Goneril, Regan or Cordelia; instead, we get Katherine and some of her impassioned dialogue from The Taming Of the Shrew. Remarkably it almost makes some sort of sense though clearly not to Tom and Rebecca who are gamely hanging on to their own characters; meanwhile Judith wanders in and out spouting obscure bits from Pericles – the one she “did for A Level”. There’s also an ongoing tussle for power and the centre of the stage between Ebon/Hamlet, Jason/Romeo and Terri/a witch from Macbeth though nobody is allowed to utter the latter’s name for fear of dramatic calamity. Actually, I don’t know why they are bothering to worry about that because their performances are  execrable to begin with – and again, let me make it clear that it’s The Felching Players not the Northern Comedy Theatre which I’m referring to. 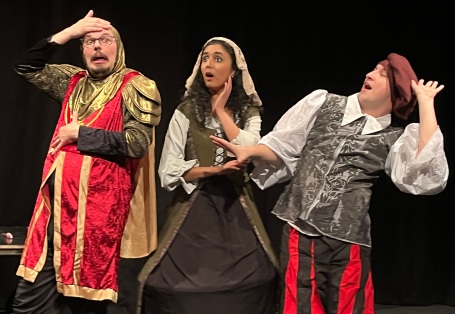 Indeed, as anyone will know who ever heard Les Dawson play his piano or watched The Show That Goes Wrong, you have to be good to be this bad and this mainly young troupe undoubtedly are (and, for the absolute avoidance of any doubt, I’m referring to the first of those two adjectives). Playing a variation on his usual pretentious know all, Robert Stuart Hudson as Tom does a good line in physical comedy especially during Lear’s mad scenes, while Kathryn Chambers’ Terri delivers lines with impeccable timing and scores with a number of withering put downs. Steven Arnold as Ebon captures the character of the overweening and rather humourless actor who gets on his fellow cast members’ nerves during rehearsals and then finds himself being sent up. Arnold then gleefully punctures Ebon’s attempts to give us the Dane by totally ignoring Hamlet’s own advice to the Players. In this he is almost outdone by Connor Simkins who ensures that Jason’s Romeo has a wild gesture for every conceivable occasion. Vikki Earle’s tough Liverpudlian Rebecca and Natasha Agar wal’s cat video loving Judith round out an ensemble cast who throw themselves into the situation with abandon and the ending (again, no spoilers) is a particular joy.

There’s no set or fancy lighting with this production and given that the play within a play sets out to do Shakespeare as Shakespeare would have done Shakespeare it’s all the more appropriate that the play (rather than the play within the play – keep up) should set out to achieve this too. I thought the costumes in the second half were particularly worthy of note looking like they had come out of the dressing up box and only just about falling into the right era most of the time. The witch’s costume was suitably pantomimic (more Oz than blasted heath) and in true full on farce fashion Romeo seemed doomed to lose his ill-fitting Elizabethan pantaloons at any moment. 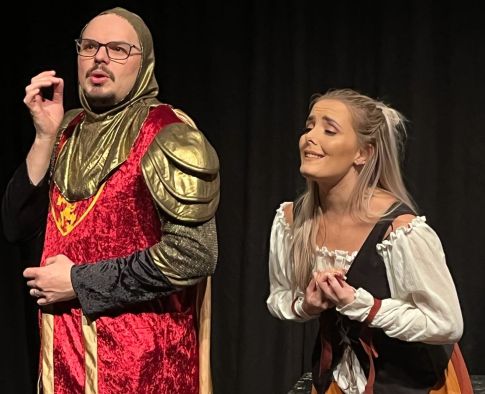 Shaun Chambers who directed all ten of Northern Comedy Theatre’s online productions during the lockdowns (a remarkable feat in itself) helms the production and brings it in at about 90 minutes mainly due to a frantic pace, post interval. He must surely be as pleased as the rest of his company to get work back into a theatre; hopefully that will soon become the new “new normal” once more. It’s great to see a company who went from live stage work to taming Zoom, now reversing that trend and taking something premiered online back to an all in the same room situation. As David Spicer (or perhaps it was Will?) once observed: “So shines a good deed in a weary world” – and you can have a go below at who said that one too.

My review of that production can be found here