One of the most popular young children’s authors of the last decade is Chis Haughton. He has produced a series of highly colourful and quirkily illustrated picture books with animals front and centre but which foreground situations youngsters will invariably connect with. His 2012 book Oh No, George! has been turned into a stage show by cleverly named company Can’t Sit Still which is currently coming to the end of a tour (the last few dates/venues are here). Now, for those who have either missed their opportunity or cannot access a venue and just in time for the Easter holidays, comes a five part digital version What Will George Do? 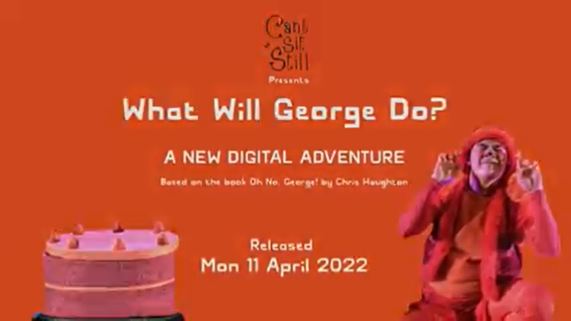 And that’s the burning question. Because George is a big old soppy dog who wants and tries to do the right thing but, presented with a number of tempting scenarios, invariably gives into temptation. When his human, Harris, has to go out and leave George alone there are three simple don’ts which the pooch is left to ponder. They involve not tucking into a cake, resisting the urge to dig up the garden and leaving arch enemy Cat well alone; well guess what? The USP here is that the audience are made complicit and asked to make choices on George’s behalf. They are presented with a series of digital buttons to press to either prevent George getting up to mischief or, and I guess these will be the more popular options, aiding and abetting the increasing levels of naughtiness.

Once you’ve reached the end of the tale it can, of course, be rerun with different choices and there’s also the facility to pause and discuss or restart sections. However, in truth even if the choice maker does try and prevent mayhem by doing “the right thing”, George’s natural instincts will still lead him into trouble but then it really wouldn’t be much fun if, as in one suggestion, he simply went to sleep. So, the stage is ripe for some organised mayhem much to Harris’ chagrin when he returns. There are shades of the Sorcerer’s Apprentice section of Fantasia in the set up when a certain Mouse also couldn’t resist the urge to see what would happen if ….. But there’s a nice moral message brought into play – if you mess up it’s not the end of the world but you do have to clear up; the audience get to help with that too. 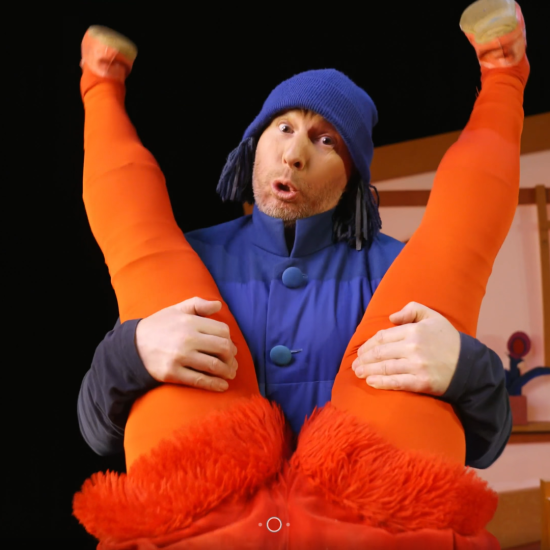 Each of the five sections is short and sweet but director Catherine Boot has ensured they are full of lively movement and a couple of songs. Dialogue is kept to a minimum (mostly for exposition purposes and narrated by Haughton himself) and is both signed and subtitled. The emphasis is firmly on the visual with a brightly coloured pleasingly off kilter set and costumes from Laura McEwen. The two actors Jon Bonner and Rob Penny give one hundred percent and must really whip up some great interaction with the audience in the live version. Bonner gets to ride a unicycle (for no other reason than that he can) and Penny as George himself performs a series of energetic tumbles, back flips and cartwheels which help to conjure up the scatty nature of the big mutt he’s portraying. Although he never resorts to crawling round on all fours, his carefully choreographed two legged action (Craig Edwards is credited as animal movement consultant) more than convinces – as does his loveably dopey grin.

This is a successful transfer to the digital realm which will charm and amuse. Probably like the picture book it is based on there will be repeated demands of “again” once the credits roll. Fortunately, there are enough choice options presented to make this a pleasing prospect even if the outcomes are predictable. Ah well, never mind: we’ve all been there George!