The Scenesaver platform is currently having a themed week promoting the more “horrific” side of drama with its Fright Night productions. Amongst its offerings are a series of seven short pieces called Frighteners; these come from Spontaneous Productions Theatre Company, led by Jonathan Kaufman and his siblings Julian and Lucy. The plays were captured last year across the show’s four-night run. I assume that they have been uploaded in the original order, so I thought I’d watch them that way to replicate the experience. However, just to make sure my heart could take it I thought I’d split the seven plays into two tranches and hope my nerves would take the strain.

First up is Three Wise Monkeys by Lucy Kaufman from a story by Chris Murray. An avuncular voice introduces us to the tale of young Arthur who becomes fascinated by a wooden statuette in his parent’s house and is 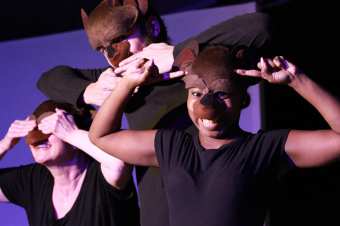 convinced that the three simian figures on it keep swapping round….if only he could catch them doing it. Far from chilling the blood, this is a nostalgic and even quaint little playlet which makes interesting use of choreographed movement. All of this is played out to a soundtrack of 1930s crooners which establishes time and place very easily. The playlet finishes on a note of mystery and serves as a nice little amuse bouche.

Next comes The Nightmare written and directed by Jonathan Kaufman. Sarah wakes Michael to tell him about the nightmare that has awoken her. He’s not best pleased until he hears that the nightmare is about his own

death and then he starts to take a bit more interest. They eventually go back to bed but is the nightmare actually over… or is it only just beginning? This playlet is a bit creepier than the first and has that sort of circularity which is often produced by bad dreams. As with the first play events are left to our imaginations to resolve. The dialogue has a ring of “it’s the middle of the night and can’t we just go back to sleep?” authenticity about it.

The Strange Tale Of WW is adapted by Jane Walker from one of Edgar Allan Poe’s gothic stories about death, fortune telling, spirits and revenge. Like the Ancient Mariner, the other worldly WW is condemned to retell his story to anyone who will listen and confess his crimes and their outcome.

The piece is played in appropriate grand guignol style with characterisations bordering on the clichéd though that is mostly down to Poe’s original. The ending works particularly well and is all the more effective for being in silhouette. This is not one of Poe’s most well known stories so at least there is some element of surprise to it. However, to me it is more like one of Roald Dahl’s Tales Of The Unexpected than a full-blown horror story.

Waiting Room is, however, properly creepy and contains a scene which should probably carry a trigger warning for anyone who has ever lost a baby. In this tale by Julian Kaufman both a doctor and a nurse experience supernatural visitations that lead them to take drastic action. The piece is 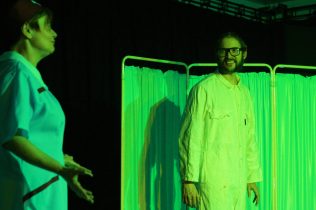 somewhat constrained by its own time format – the ending in particular seems rushed – but is the most successful of the sections so far in conveying a sense of terrible deeds in ordinary surroundings. I’m not sure whether the blue wash lighting employed in the piece was an effect used live or is a result of a video camera setting but it created an appropriate atmosphere which enhanced this tale’s telling.

Indeed, the light and sound do much to enhance all the playlets which are otherwise very simply staged in front of black curtains with a full sized screen to one side. This is used effectively throughout for shadow projection which adds an eerie dimension to proceedings. The small cast play multiple roles with an understanding of the genre in which they are working. Acting honours go to Hjalmar Norden for his varied characterisations, particularly the disturbing figure in the final piece; he definitely is the stuff of a disturbed night’s sleep. I can’t honestly say that I’ve felt particularly terrified so far but these short pieces hold their own interest and maybe I’ll get (un)lucky in the second set….if I can pluck up the courage to watch!

Frighteners is available via the Scenesaver Platform – click here