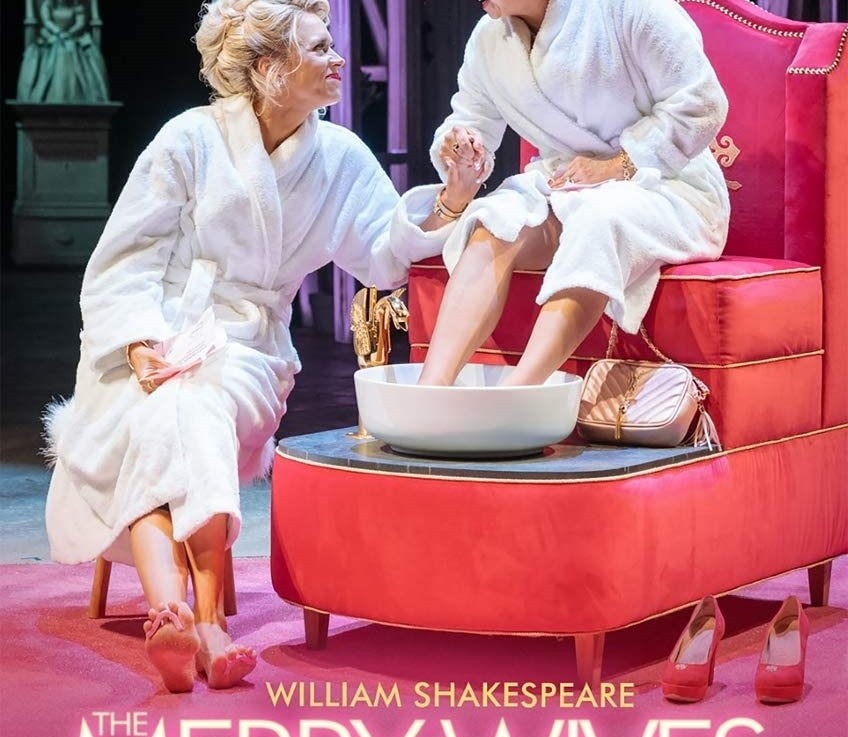 Along with every other claim made for (but, of course, never by) Shakespeare it is said that he invented the sitcom with his only play written about contemporary British life – at least, the only one we know about. Never regarded as one of his best comedies The Merry Wives Of Windsor is about some very British preoccupations, money, class, sex and family politics. Legend has it that the play was hastily constructed at the behest of Queen Elizabeth herself who wanted to see more of the fat knight Sir John Falstaff having enjoyed his exploits in the Henry IV plays.

And it is this legend which is referenced in a larky opening which might have come out of Ben Elton’s Upstart Crow via the Terry Gilliam animations for Monty Python. This sets the tone for much of what is to follow as nods to comedy shows such as ‘Allo, ‘Allo, Some Mothers Do ‘Ave ‘Em, Only Fools And Horses, the Dick Emery Show, etc., etc. pepper the action. However, the main point of reference seems to be TOWIE as Windsor itself seems to have shifted from Berkshire to Essex and the inhabitants gain estuary accents and wear designer labels. Or at least an alternative reality Elizabethan era mash up of the same. Lez Brotherston’s fabulous and fantastical costume designs are one of the definite highlights of the show and have an almost pantomime quality to them – another great British comedy staple.

Fiona Laird’s production does play fast and loose with the text with modern interpolations which always get a laugh but might upset Shakespeare purists. Given that Wives has more prose content than any other Shakespeare (some 87%) there’s plenty of room to do this without too much interruption to the flow of the original. “Quelle catastrophe, le Brexit,” mutters French Dr Caius who also manages to land a mask wearing gag even though the production took place way before current events. There’s a smoking barbecue for Falstaff to hide behind, a filthy wheelie bin (rather than a laundry basket) for him to hide in and a swimming pool to escape across. A couple of Eastern European servants discuss the thesis about Proust which one of them is writing, the men go golfing rather than “a-birding” with an electronic club cart and “sweet” Anne Page has been reinvented as a stroppy teenager complete with designer dog. Less successful are swapping the final scenes from Windsor Great Park to the town square (it makes some sense at least to dress up as a stag in the former) and the Ford scenes where surely even Falstaff wouldn’t be fooled by such a cartoonish disguise. There is also plenty of glorious visual physical comedy orchestrated by Toby Parks of Spymonkey and he brings his own brand of mayhem to scenes such as the chase after the fat woman of Brentwood (usually Brentford – see what they did there?)

As the two wives of the title Rebecca Lacey (Mistress Page) and Beth Cordingley (Mistress Ford) have a fine sense of their characters and draw the audience into the mischief while showing that the ladies have the upper hand. They are aided and abetted by Ishia Bennison as a garrulous Mistress Quickly and in a gender change by Katy Brittain as the leopard print clad Hostess of the Garter Inn. This latter makes complete sense as it continues the theme of the women directing the course of events and being the instigators of the various tricks; however, I did find Brittain’s characterisation a bit too broad, even in this overtly comedy version. The men of course are all idiots. From Tim Samuels’ increasingly camp Shallow to Luke Newberry’s accident prone Fenton and Tom Padley’s “Tim Nice But Dim” interpretation of Slender it would appear that Windsor is full of nincompoops and inadequates. And of course, Shakespeare really has it in for both the Welsh and the French making both Sir Hugh (David Acton) and Dr Caius (Jonathan Cullen) language manglers of the first order. Ultimately the town (men and women) unite forces against the outsider Falstaff who thinks that because of rank and privilege the locals will be only too happy to be fleeced and grant him sexual favours. David Troughton as a gargantuan incarnation of Shakespeare’s most frequently used character couldn’t be better and even manages to find some moments of pathos during the ribaldry. 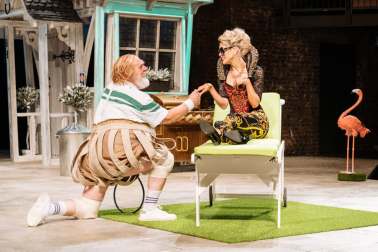 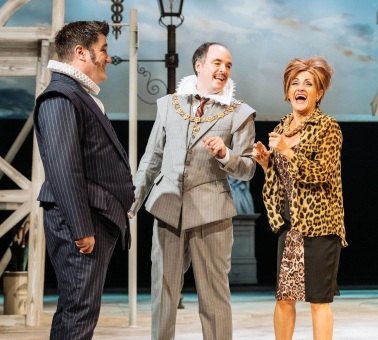 While this is definitely Shakespeare lite it doesn’t waste time pretend to be anything it isn’t and puts fun at the top of the agenda. I actually saw this production live at the Barbican when I was preparing to appear in a production myself (click here) and didn’t particularly care for it at the time. Nevertheless, I thought I would give it another go, and I have to say I found it so much more entertaining this time round and could appreciate more fully some of the clever referencing. As a sit com led production perhaps it had found its metier on my TV screen rather than on a stage and was actually a better way of experiencing the show.

2 thoughts on “The Merry Wives Of Windsor (Online review)”